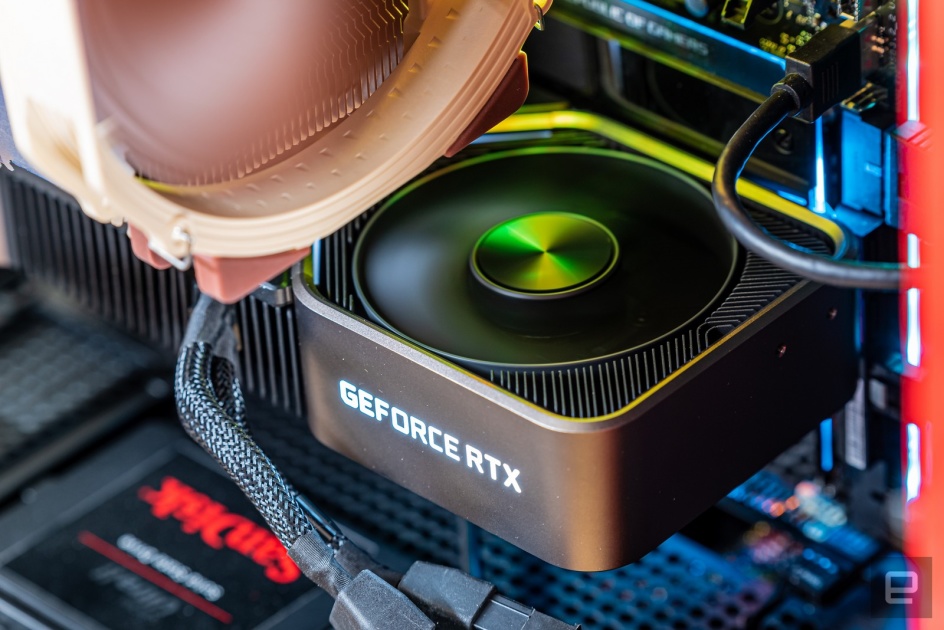 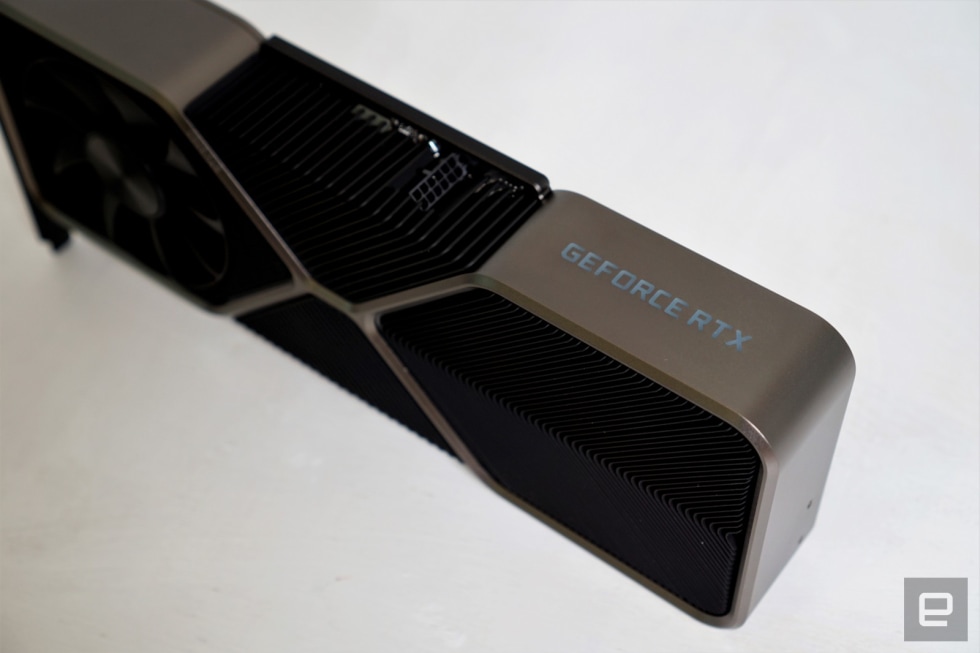 The 3080 Founders Edition card we reviewed isn’t much bigger than the 2080 Ti. It has a sleek, almost office-professional aesthetic that’s a nice contrast to the gaudy third-party cards we’ll inevitably see. The cooling is also dramatically different: NVIDIA made the PCB more dense to fit a fan that blows air directly through the card, while another ejects warm air from the rear. There’s also a new compact 12-pin power connector that opens up more room on the PCB (and yes there’s a dongle in the box for two 8-pin cables).

Under the hood, the RTX 3080 is powered by 8,704 CUDA Cores, 68 RT ray tracing cores and 272 tensor AI cores. It has more than twice as many CUDA cores as the RTX 2080 Ti, and while its RT count is the same, the new architecture is around twice as fast.

Surprisingly, its tensor core count is dramatically lower than the 2080 Ti, just 272 compared to 544. But again, NVIDIA claims this new generation of tensor AI cores is significantly faster than before. And if all that isn’t enough, NVIDIA also stuffed in 10GB of GDDR6X RAM, a new type of memory that’s making its debut in the RTX 3000 GPUs.

All games tested in 4K/HDR with the highest graphics quality settings and ray tracing (where available), on a rig powered by an Intel Core i7-8700K and 32GB of RAM.

All of that hardware is in the service of one thing: Making the RTX 3080 the fastest GPU we’ve ever tested (that is, until we get our hands on the 3090). It reached 82FPS in the Shadow of the Tomb Raider benchmark, while running in 4K with maxed out graphics settings and “ultra” RTX shadows. In comparison, the 2080 Ti hit only 52 FPS. It clocked in around 2,500 more points in the 3DMark Port Royale ray tracing test, as well as 1,400 more points in the TimeSpy Extreme 4K benchmark. The big takeaway: this GPU isn’t just a modest improvement over NVIDIA’s last card, it’s a huge leap forward.

The 3080 also made Control playable in 4K with all of the graphics and ray tracing settings dialed up. It sat comfortably between 53 and 60FPS. I had to turn on DLSS to reach those speeds, though. That’s NVIDIA’s technology for upscaling low-res textures with its AI cores. The 2080 Ti, topped out at around 40FPS. Running Control natively in 4K on the 3080, without DLSS’s help, I hit a middling 32FPS. Clearly, ray tracing can still crush this hardware, which is why NVIDIA is investing so much in other ways of delivering high-res gameplay.

If you’re lucky enough to have a high-refresh rate 4K monitor or TV, the 3080 will also help you get the most out of that. I was able to play Wolfenstein: Youngblood in 4K with DLSS and ray tracing settings turned on at around 119 FPS. The 2080 Ti, meanwhile, could only hit around 70 FPS. I’ve argued for a while that framerates matter more than rendering resolution — the 3080 will finally let you have both.