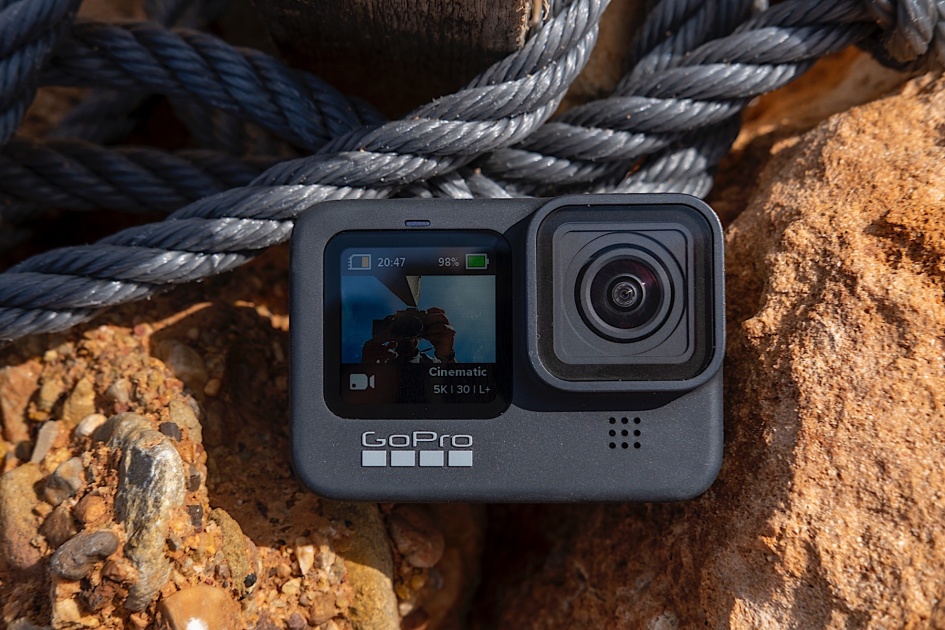 This is particularly true with textures on natural environments: rocks, leaves, water and the like. With the Hero 9 you can see more definition and everything just feels a little sharper. I personally like the extra pop in color, so it’s a general thumbs up from me when it comes to overall image quality.

This one has been on my wishlist since, basically, forever. The “price” we pay for smaller electronics is obviously smaller batteries. It’s something of a catch 22 for things like a GoPro, as you can’t increase battery size without increasing the size of the camera. As mentioned before, the Hero 9 is bigger, and GoPro has used some of that extra space to increase the size (and capacity) of the battery this time. The Hero 8 cell is 1,220mAh and the one in the Hero 9 is 1,720. That’s a generous 500 more milliamp-hours to play with.

But what does that mean in real life? Surely 5K is a power suck and running those two new screens can’t help. And you’d be (partly) right. Those features no doubt do tax the battery, but overall you can expect to get more life out of the Hero 9 under similar conditions to the Hero 8.

As part of my testing for this review I would use each camera side by side for comparisons, and the Hero 8 would usually run out about half an hour before the Hero 9. It’s always hard to put an exact number of minutes to the “gain” in mAh, because every mode and feature will drain the battery differently. In a straight shoot out though, with both cameras recording 1080p, Linear mode and with HyperSmooth off, the Hero 8 managed to record for 1:45 before flaking out. The Hero 9 ran on for about another 25 minutes. GoPro’s marketing claims the new battery offers 30 percent more life — and that’s pretty close to what I achieved with my test.

GoPro was also keen to point out that the new battery should perform better under cold conditions. I’ll admit, this is something I’ve never really encountered as a problem (I evidently don’t ski enough), I also live somewhere that’s typically hot, so for now, just know that it’s a claim GoPro is making and might be of interest to you if winter sports are your thing.

Since the Hero 7, GoPro has been very fond of HyperSmooth and TimeWarp. Understandably so, as HyperSmooth was a vast improvement on the stabilization found on the Hero 5 and 6, and TimeWarps are addictively fun. Both features have been given a modest revision in the Hero 9.

Let’s start with HyperSmooth 3.0, as personally, this has become a go-to setting for me. GoPro doesn’t really go into specifics about what’s new this time around, but it does confirm that “Boost” mode is available in all video modes (including 4:3 modes and SuperView).

Comparing the HyperSmooth 3.0 with the version on the Hero 8 (2.0), it’s hard to tell how much better it is. This is a feature that I continue to love, and it has easily doubled, if not tripled the amount of usable footage I get out of the camera. What I can say, though, is that when it’s used along with Horizon Leveling (a feature available only in Linear mode) you end up with what I consider to be the ultimate combination for self-shooting and/or regular filming (as in, not POV action shots etc.).

With Linear and Horizon Leveling on, HyperSmooth really comes into its own for more “conventional” cinematic shots. I tried it out while taking hard corners on a scooter, and the resulting footage looks more like it was shot on a dolly or rail. The lack of lateral movement or angled turns, coupled with the smoothness from the stabilization, really do make for impressive establishing shots, scenic tours or run-and-gun vlogs.

TimeWarp, on the other hand, gets a new feature: half time. If you’ve ever used TimeWarp, you’ll know that you have the option to drop from the sped-up timelapse mode down into real time. Perfect for when you want to jump out of the effect for a moment to catch some natural action. With “half time” it takes things a bit further by dropping you into, well, half (real) time. Or slow-motion, basically. It’s another neat effect I expect a lot of people to get creative with.

One thing I will say is that going from the “fast” TimeWarp down to half speed actually makes it feel like super slow-mo because of the immediate contrast. This is similar to how I noted in my Hero 8 review that the (then new) real-time mode felt like slo-mo in comparison to the TimeWarp parts of the same video.

A minor complaint here is that, while you can use both real time and half time in the same TimeWarp, it’s not simple to do if you’re doing something else that involves your hands. For example, I tried switching between the two while the GoPro was mounted on the handlebars of a scooter (in motion). The thing is you have to choose what the big button on screen will activate (i.e. either half time or real time). If you then want to change that, it’s a smaller button to the right, and then tap the big button again. All very tricky when whizzing along at speed.

GoPro has been sneaking in new advanced features since forever, but now it’s making them a primary feature. If you head into the video settings on the Hero 9, you’ll see some new options, namely: Scheduled Capture, Duration and HindSight. As you might have guessed, scheduled capture allows you to set a time and date, and the GoPro will magically turn itself on and start recording. Duration simply lets you set a fixed time to record for. These two features can even be used in tandem, say if you want to record the sunrise for 20 minutes, simply dial in the time you want it to start shooting, set the duration, and enjoy sleeping in.

HindSight is a little more interesting. When activated, it records for 30 seconds on a loop before you press the shutter button. So, if you don’t want to capture a moment you can do so with a tap, instead of just recording the whole time just in case. It’s similar to the Loop mode that already exists, but you won’t need to start recording until there’s something you know you want to capture. Or simply put, it’s like Live Burst (or Apple’s Live Photos) for video. It’s not something you want activated all the time though, as it’s going to ding your (albeit improved) battery life for sure.

The main thing with HindSight is that you have to remember to turn it on. And remember it’s even a feature you can use. For example, I recently enjoyed watching a thunderstorm with fork lightning while on vacation. I even commented how cool it would be to capture it on video, all the while the Hero 9 was right beside me. If I had thought about it, that would have been the perfect opportunity to test HindSight. In hindsight.

For a while, GoPro rivals usually meant “GoPro clones.” Usually these were unknown brands with eerily similar designs. Of course, Sony’s Action Cam series marches on and has its own fans (thanks to the optical image stabilization in particular). Then there’s the notable VIRB line from Garmin and, of course, the Osmo Action from DJI. All these cameras have their strong suits, such as that OIS, Garmin’s sport-centric GPS data and overlays or DJI’s early adoption of a front-facing screen. GoPro has continued to dominate the mindshare of this space though, thanks to its ubiquity, vast array of accessories and lack of reliance on specific features.

But there are also new(ish) challengers such as Insta360 and its modular R camera, Nikon and Yi Cam. One thing all the above companies seem to share is their infrequent update cycle. This means that, while each has its own strengths at launch, GoPro’s annual refresh soon brings it up to date. That combined with the brand’s sheer dominance in the space mean it’s pretty easy just to reach for the Hero that suits your budget rather than sift through the rivals looking for one that might meet your specific needs. All this to say, no real change here, other cameras are out there in the action space, but the Hero 9 is an easy, safe choice.

You may be wondering why we’ve got this far without mentioning the price. There are two reasons. The first is that the price of the new Hero Black doesn’t tend to vary that much (it’s usually $399, although the company did try charging $499 for the Hero 6 Black, and soon changed its mind). Secondly because, in mild contradiction to the above, this year there are two prices for the same camera.

If you’re willing to sign up for a year of GoPro Plus at the same time, the Hero 9 will only cost you $350 (Plus included). That means the Hero 9 and a year of Plus costs $150 less than buying both those things separately, or $100 less than buying the camera alone. If, however, you hate money or really, really don’t want the cloud service that you can simply never use, you can buy the Hero 9 on its own for $450. It’s a slightly unusual approach, and one clearly intended to shuttle more users onto its Plus service, but given the obvious financial advantage (and decent benefits of Plus) it seems like a no-brainer (you can just cancel after the year if you wish). If you live somewhere that Plus isn’t available then you’re stuck with the full $450 price.

Another year, another new GoPro that’s better than the last. Much like how each iPhone is always “better” than the one it replaces, the Hero 9 predictably bests the Hero 8 across the board. But, unlike previous iterations, the Hero 9 feels like one of the more robust updates of recent years. The new front display, new sensor, new/higher resolution in tandem with some decent software features go a long way to making the Hero 9 feel like a very different camera. The new pricing structure might be a little quirky, but it does mean you’re getting an added value if you opt to bundle in a year of Plus with the camera (existing subscribers automatically get the reduced price).

There will likely be a few people that aren’t fond of the extra size and weight, or the need to replace any camera-specific accessories if you’re upgrading from an older model. The same goes for those with a stash of batteries, none of which will work in the new camera. That said, there are plenty of reasons to like the Hero 9, and if you’ve been on the GoPro fence, now is as good a time as any to jump in.