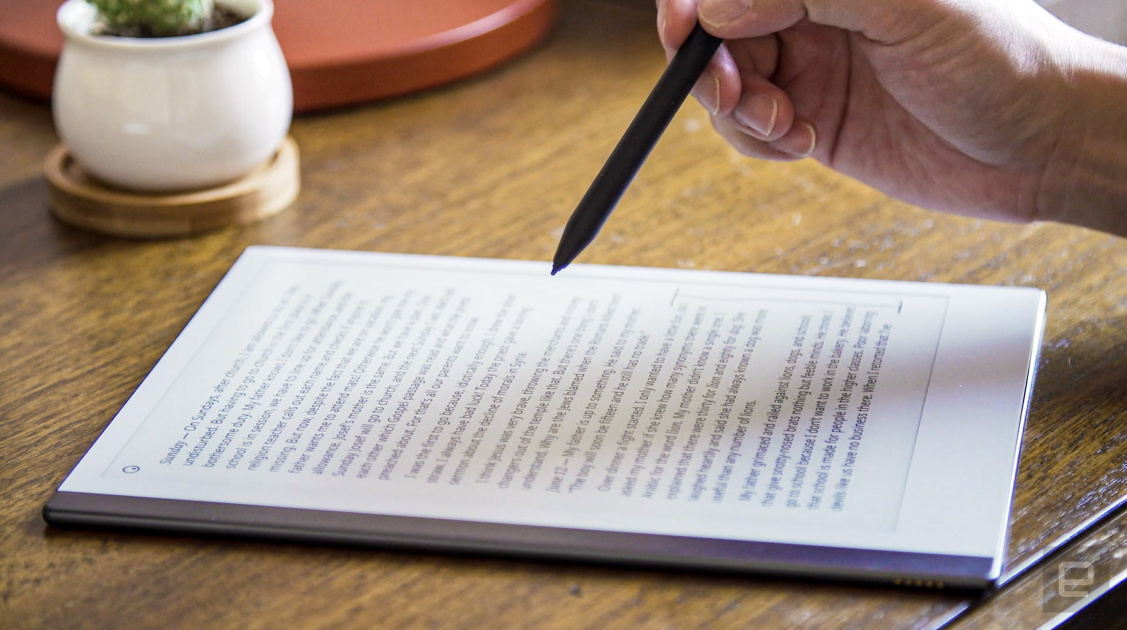 Then there’s the screen. It’s the same size and resolution (1,872×1,404) as the one found in the original model; there’s still plenty of space to scrawl and doodle. There are some significant benefits that come with using the reMarkable 2’s more modern display, though: Text looks a little clearer, and when used with the new Marker, the tablet can detect 4,096 levels of pressure for more precise shading. More importantly, thanks to a newer Canvas panel and some improved internals, the latency between the Marker and screen has been cut nearly in half, from about 40ms to 21ms here.

I don’t doubt that some will benefit from that upgrade; artists, in particular, will notice the difference as they lay down long, sweeping lines. I’m more of a frenzied note-taker, so I deal mainly with short, staccato strokes. In situations where I’m just trying to get everything down fast, this combination of screen and Marker didn’t feel appreciably better. Still, I’m glad reMarkable put in the work. And I’m especially glad the company changed how the screen feels.

The company says it used a new textured resin layer on top of the glass to make writing on the reMarkable 2 feel more like writing on paper, which I don’t buy. If anything, the original reMarkable’s screen had a more pronounced, paper-like grittiness that doesn’t come through here. That’s hardly a dealbreaker, though, because writing on the r2 still feels absolutely fantastic, I think this one strikes a better balance of tactility and flow.

There’s a subtle feel to writing on this that’s missing from devices like the iPad Pro, and it goes a long way in making the very act of using the Marker feel more natural.

Again, I really can’t overstate just how nice this hardware is. reMarkable did an amazing job elevating its tablet’s design, and more importantly, all that work serves the purpose of keeping your eyes locked right on that screen. It’s clean, it’s functional, and I’m here for it. But that’s not to say the reMarkable 2 is the upgrade everyone has been waiting for.

For one, there’s still just 8GB of internal storage here, of which roughly 6GB is available to play with, out of the box. That’s been plenty so far, but considering this thing’s price, a bit of a boost here wouldn’t have been out of line. Meanwhile, a 1.2GHz dual-core CPU replaces the pokey processor found in the original, and the 1GB of RAM is double what the first reMarkable shipped with.

On paper, that sounds like the leg up this tablet has long needed. In practice, the difference in performance feels negligible. Popping in and out of notebooks feels equally quick on both models, as does poking through menus and all of the typical navigation bits. Really, the only times I noticed a difference in performance was when it came to dealing with files I loaded onto the reMarkable 2.

As I mentioned, you can use the reMarkable 2 as an enormous e-reader if you’re willing to sniff out DRM-free ePub files. (In other words, don’t bother trying to get your Kindle library onto this thing.) In my experience, the formatting of ePub files tends to look a little screwy on the reMarkable, which makes tweaking the font, margins, justification, and line spacing a must. That all happens only slightly faster on the reMarkable 2, but unless you’re testing an older model right next to it, you will not notice the difference. Ditto for loading and reading PDFs: The reMarkable 2 will render certain pages (particularly those with graphics or diagrams) marginally quicker than the original model, but again, it’s almost a dead heat between the two.