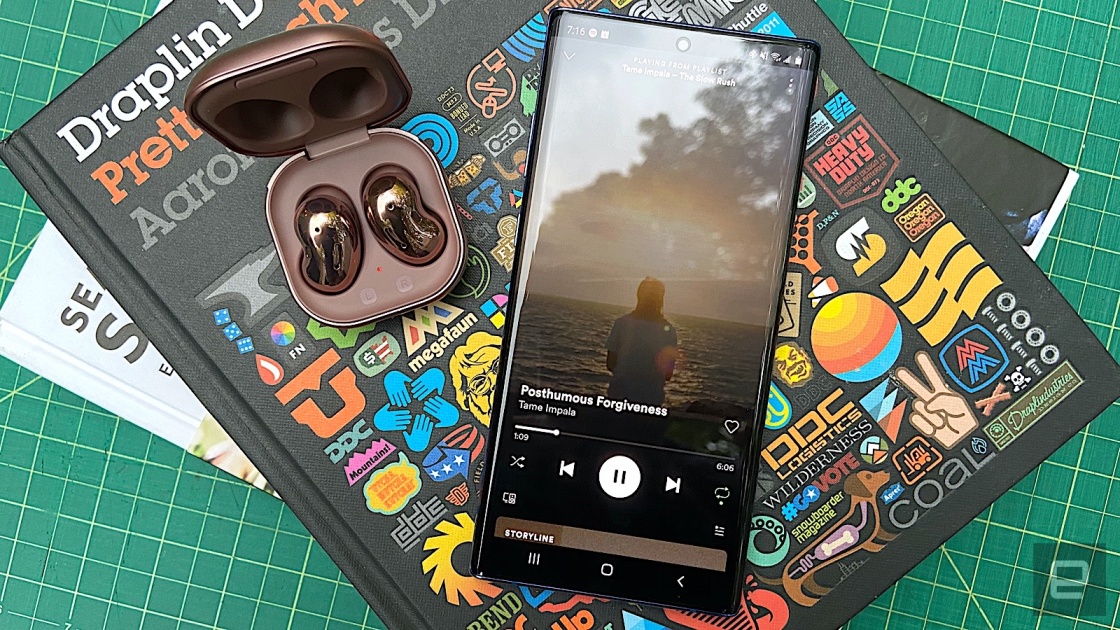 Similar to what Apple does for AirPods and some Beats headphones, you can summon Samsung’s voice assistant without touching the buds or your phone thanks to “Bixby voice wake-up.” You’ll need to update the Bixby app first, but in a matter of minutes you’ll be able to just say, “Hi Bixby” and tell it to do something. Of course, this only works with Bixby, which is pretty limited. But, it works.

Samsung also offers a Buds Together feature for devices running One UI 2.5 or later. This allows you to pair two sets of earbuds to the same device so you and a friend can listen to music or watch a movie… together. Unfortunately, I only have one set of Galaxy Buds Live, so I wasn’t able to test this. But if we’re ever able to travel again, I can see the benefit. Especially since you have the ability to adjust volume individually for each pair of buds.

While the design of the Galaxy Buds Live is unique, it has a big impact on overall sound quality. Inside, the Galaxy Buds Live are equipped with 12mm speakers. Those are larger than what the Galaxy Buds+ have. Samsung says the sound chamber also includes a Bass Duct and Air Vents to harness the AKG-tuned sound. Across a range of genres, bass feels flat and lacks the energy that more capable earbuds showcase. At higher volumes, the treble overpowers to the point of becoming painfully unpleasant. I was able to combat this to a degree with the Bass boost and Dynamic audio presets, but those don’t make a drastic difference. Even with those settings, bass almost entirely disappears when you crank these up all the way. There is solid detail and clarity, but the lackluster tuning cancels out any chance of depth or immersion.

Softer acoustic music sounds pretty good, but when you move into intense hip-hop or metal, the Live’s shortcomings quickly become apparent. Without the dynamics that punchy bass can offer, the clarity alone isn’t enough. And when you turn these up loud, it’s all abrasively bright guitars and cymbals. To me, the cheaper Galaxy Buds+ sounded a lot better.

Then there’s the active noise cancellation. Samsung included ANC on the Galaxy Buds Live, but the company’s “open type” design limits its usefulness. Samsung says the noise cancellation here will block out your surroundings when you need them to, but I’ve found that’s simply not the case. Even with ANC on, I could still easily hear the commotion around my house. I had to rely on more volume to truly drown out the noise, which isn’t great for preserving my hearing. The addition of active noise cancellation is great, but I don’t understand why Samsung chose to add it to a product that doesn’t create a seal in or around your ear that would actually make it effective.

As you might expect, Samsung is also putting a big emphasis on call quality with the Galaxy Buds Live. Three microphones and a so-called Voice Pickup Unit work together to keep you sounding your best when you need to have a chat. The company says the Voice Pickup Unit senses jaw movement, and transfers that data into voice signals that improve how you sound to the person on the other end. A lot of companies make similar promises, but Samsung delivers. During calls, people I frequently test earbuds with noted I still sounded like I was on speakerphone, but the background noise was reduced to a low hum.

Samsung promises eight hours of battery life on a charge, with another 21 hours in the compact charging case. That’s with ANC and hands-free Bixby turned off though. With just the noise-canceling feature, the battery range sinks to six and half hours. Tack on the virtual assistant and it goes down to six hours. That’s a big drop, so you’ll have to consider how badly you want to use the Galaxy Buds’s flashier features. During my tests, I managed just over the rated time — almost seven hours — with just ANC on. I chose to keep Bixby disabled as I hopped from Note 10+ to MacBook and iPhone. If it’s any consolation, Samsung did include a quick charge feature that gives you an hour of listening time in five minutes. And you can charge the case wirelessly, including on the back of a compatible Samsung phone.

At $170, the Galaxy Buds Live are an affordable set of flagship true wireless earbuds. In that sub-$200 price range, the Jabra Elite 75t is the best option, but it costs $10 more. That being said, Jabra’s latest earbuds are small, comfy and feature-packed, so you get a lot for your money there. If you don’t mind splurging, Sony’s WF-SP900N has a lot of what makes the company’s pricier WF-1000XM3 earbuds so good for $200. And if you’re looking specifically for something to complement a Samsung device, the Galaxy Buds+ are your best bet. From top to bottom, I prefer them to the Galaxy Buds Live, and they’ll save you some cash.

Samsung took some risks with its noise-canceling true wireless earbuds. Design-wise, the Galaxy Buds Live offer a more comfortable fit that sits outside of your ear canal. Of course, that means there are some sacrifices to sound quality and the effectiveness of the ANC. When you add in mediocre audio and the battery life caveats, these are hard to recommend. If Samsung can iron out a few of these issues, the Galaxy Buds Live could be a compelling option, but that may be hard to do because of the design.