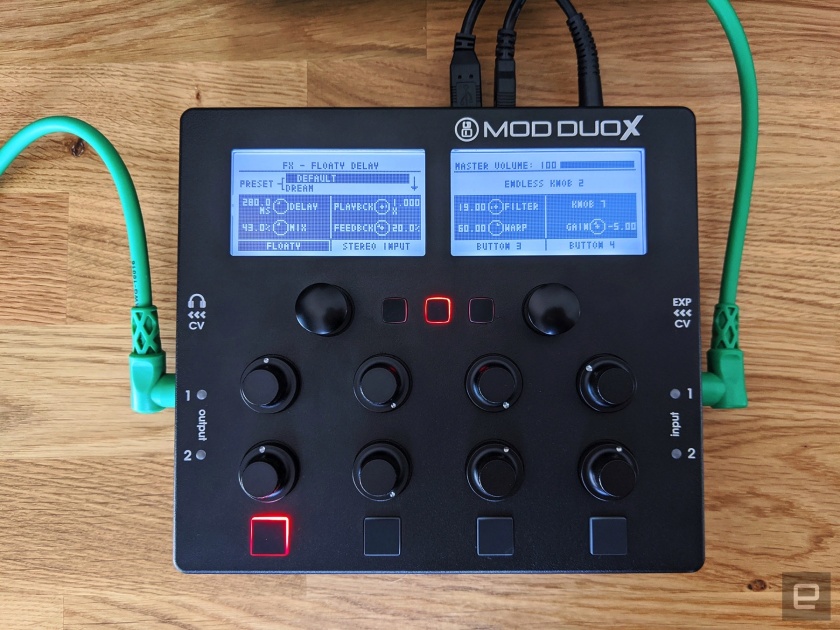 The synth modules leave something to be desired, honestly. There are some gems in here like TAL Noise Maker, AmSynth, Triceratops and the incredible DX-7 emulator Dexed (the latter two still being in beta). But, there are also a lot of SoundFont players, which are good for recreating ‘90s video game scores (and not much else).

The selection of CV-controlled synth modules is pretty limited right now, but they’re already quite capable of creating experimental textures, chest-rattling drones and basic poly synths. Plus, there are a ton more in the works. Once you enable “show beta plugins” the number of CV plugins jumps from 19 to 104, including additional oscillators and a ring modulator.

So as a virtual modular synth, the MOD platform should be getting more interesting. It’s worth mentioning that the Poly Effects Beebo also uses LV2 plugins, and it comes with a selection of ported modules from the beloved Mutable Instruments. So perhaps those will eventually make their way over to the MOD Plugin Store as well.

For the moment, though, the MOD Duo X is much better as an effects processor than as a synth. Most of the effects here are pretty good, but some are clearly better than others. The delays are mostly solid, as are many of the reverbs and modulation effects.

The various distortion, saturation and amp emulations are a little more inconsistent. The best distortions are the ones that embrace their digital side like the Infamous Hip2B and Paranoia, which are aggressive, glitchy and absolutely destroy your signal. Plugins that try to recreate classic analog gear are a little less exciting. The Big Muff emulation, for instance, isn’t bad but it sounds like a real Big Muff in the same way a Monet looks like a real sunrise.

The amp and cab models are also a bit uneven. The Marshall JCM800 emulator is pretty good, but the Rickenbacker M-16 Supersonic is underwhelming. With some careful tuning, though, the Duo X can be a solid headphone amp or direct in box for a guitar. Just be warned that the cab simulators vary pretty wildly not only in quality but in volume, too.

Those volume swings are one of the biggest annoyances with the Duo X. All other settings being the same, some cabs or pedals are whisper quiet, while others will threaten to blow out your speakers. You’ll also notice some digital clipping and artifacts with certain effects. There’s a ton of horsepower in here (a 1.4GHz 64-bit hexacore ARM CPU and 2GB of RAM) and it’s almost impossible to max out the CPU without being ridiculous, so I suspect the issues lie with those particular plugins.

It may still have some rough edges, but if you want an expansive all-in-one multi effects unit with amp simulators that you can use for direct recording or practicing with headphones, then the MOD Duo X is quite compelling. Yes, you could get a multi-effects pedal from the likes of Zoom or Digitech that also has a ton of effects and amp sims, but they can’t hold a candle to the Duo X’s flexibility, ease of programming and build quality. Plus, the live performance potential of the Duo X can’t be overstated.

If you’re more interested in creating one-of-a-kind effects than building a virtual pedalboard, the ZOIA is the better bet. Its interface is a little clunkier and doesn’t lend itself to real time manipulation, but it makes it much easier to take the individual components of an effect and connect them in new and interesting ways.

Meanwhile, if you want something that will be an instrument first and foremost, the Organelle is the way to go. It’s still among my favorite sound mangling tools and really shines as a playground for experimental sampling, sequencing and effects.

Both the ZOIA and the Organelle have larger and more active communities building unique patches. While there is a place to share pedalboards for the Duo X, right now it doesn’t seem to offer much in the way of compelling content. As MOD builds out its store and the platform matures that could change.

So where does that leave us? Well, with a very exciting and flexible device that still needs a bit of polish. The MOD Duo X has a potentially bright future and differentiates itself enough from the pack that it should have no trouble finding an audience. But it definitely needs to grow into its $749 asking price.