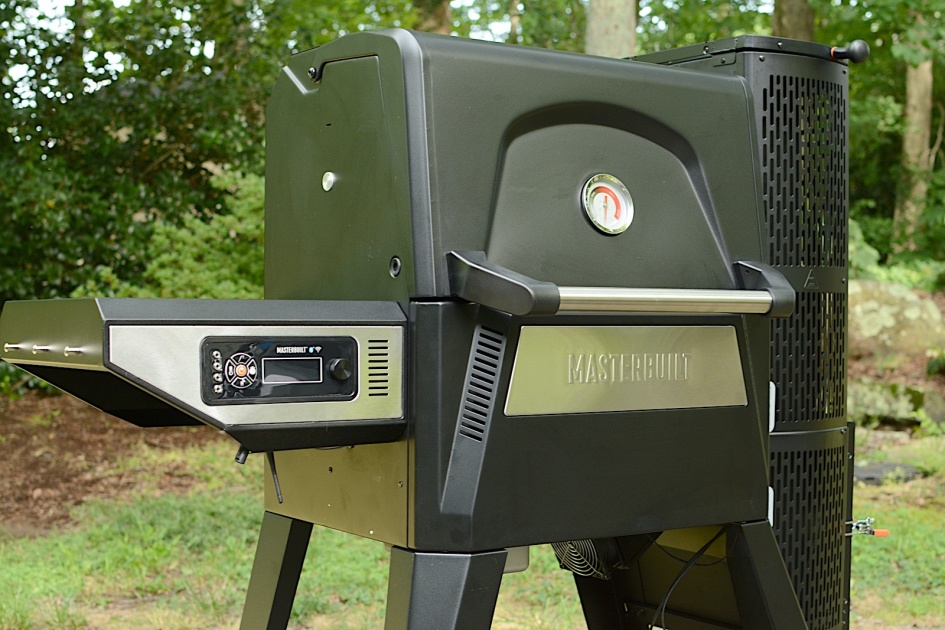 Like pellet grills, a fan helps maintain the desired cooking temperature. On the 560, it blows air upward, into the bottom of the charcoal hopper to keep the heat going and circulate it into the main cooking area. If you have the temperature set high enough for searing, you’ll see flames too. There are switches on both the hopper lid and the side door, both of which stop the fan while you’re loading or performing maintenance. It’s a safety feature, but it also means that you won’t get blasted with smoke, embers or ash when you’re trying to keep the grill going. There’s one on the main grill lid too, and while that one doesn’t stop the fan entirely, it does alert the controller that you have the 560 open. There have been some reports of issues with these switches failing, which means the grill always thinks one of the three doors is open and the fan doesn’t operate normally, making it unusable. In over a dozen cooks, I haven’t experienced this, and the problem doesn’t appear to be widespread based on user reviews. Still, it’s worth noting as you consider buying a 560.

On the left side of the 560, there’s a shelf with the grill controls. Masterbuilt has simplified the things here, giving you much less to scroll through than a Traeger or Weber pellet grill. Instead of having to navigate through a menu with a rotating knob, each item has a dedicated button. There’s a separate one for grill temperature, probe temperature, timer and phone pairing. With the exception of connecting to your phone, you select each option and then set the temp or time by rotating and pushing the dial. A bright blue display is your guide on the grill, or you can do all of this inside the Masterbuilt app. Lastly, the 560 accommodates up to four food probes at once. It only ships with one, but you can add more if you need them for $20 each.

Inside Masterbuilt made some design choices to really help with cleanup. With a pellet model, you have to vacuum out dust and ash every few cooks to keep all of that debris off your food. And, of course, to keep the grill working efficiently and safely. With the 560, there is almost no ash or dust to fall to the bottom. The only thing you’ll have to clean is the grease collection pan. It’s a smaller bin that’s easy to remove, and it sits in a larger angled tray that also slides out for cleaning. Both of these are easily accessible from the back of the 560. As far as the charcoal goes, all of that falls into a metal bin at the bottom of the hopper. And from the side door, that container can be quickly removed, dumped and returned in a matter of seconds — even during a cook.

The 560 is capable of temperatures from 150 to 700 degrees Fahrenheit. That range gives you the versatility to tailor your cooks to your preferences. Prefer to smoke ribs at 185 for the first three hours? No problem. Need to keep something warm around 165? It can do that too. Masterbuilt says the 560 can reach 225 degrees in seven minutes and 700 degrees in 13. I found those figures to be mostly true, however, they don’t factor in the time it takes for the charcoal to fully ignite. And that can vary based on ambient conditions, the state of your charcoal and how quickly your fire starter ignites the hopper.

During a few cooks, I double checked temperatures with the Smoke X2 and found the 560 was within three to five degrees of what I had set most of the time. The range was higher right after the initial preheat cycle, but it leveled out after a few minutes. During reviews of Traeger and Weber pellet grills, I typically experienced a variance of around five to seven degrees between the built-in thermostat and an external thermometer.

Getting the charcoal lit takes some practice. If you’re using fresh charcoal, this won’t be a problem. But if what you have at the bottom of the hopper is leftover from a previous cook, it will take an extra few minutes to get things going. I found that Masterbuilt’s recommendation of a food-safe fire starter keeps frustration to a minimum. A paper towel works, but not nearly as well since it burns so quickly. It also helps to slide the grate at the bottom of the hopper back and forth to knock off any excess ash from those lowest briquettes. In the event the grill doesn’t fully light, it will beep and flash an error message on the display. You can simply reset the temperature and try again. Unfortunately, you don’t get the error in the app, so you’ll want to stay close to the grill until you’re sure the fire is going. Most of the time ignition took under five minutes.

Masterbuilt says you can use lump charcoal or briquettes in the 560. This gives you some variety in brands and types of wood that are available to cook with. In my experience, charcoal alone only produced a modest amount of smoke on the 560, but the company says you can add wood chunks or charcoal to the ash bin at the bottom of the hopper to boost it. As the embers from the burning charcoal fall, they cause any wood pieces or extra briquettes to burn slowly and produce more smoke. Masterbuilt also says you can mix wood chunks in the hopper with your charcoal, so long as you don’t add more than 1.5 pounds of it. During my tests, I got the best results with both: some wood in the hopper and sporadically adding some to the ash container.