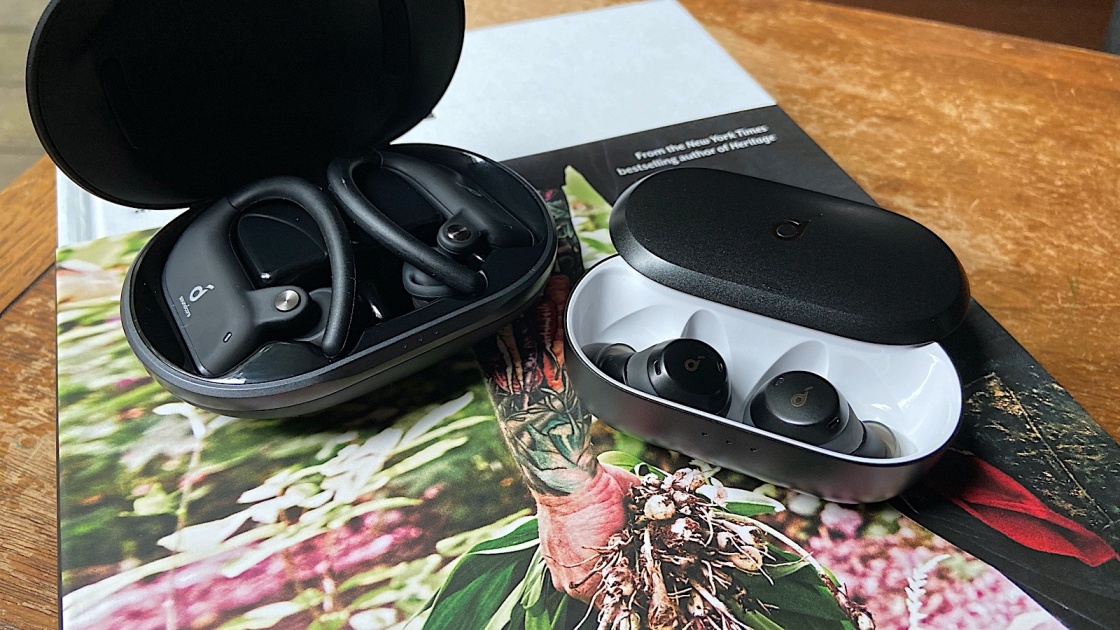 Smaller is definitely better. In general, the tiny earbuds are more comfortable. They’re usually lighter and they fit better in your ears without sticking out too far. However, the compact stature gives companies less room to work with components, and sometimes this leads to sacrifices in audio or features. That’s not the case with the Spirit Dot 2. Anker designed these buds for workouts, right down to the IPX7 sweat and waterproofing. To keep your energy up during those activities, you need thumping bass. The company says the Spirit Dot 2 employs “bass-enhancing drivers” and a so-called BassUp algorithm to optimize the low-end tone in real time. Anker says the driver design is optimized for maximum bass output, a claim which it delivers on. These small buds pack a punch.

It all adds up to one simple thing: the Spirit Dot 2 sounds surprisingly good for an $80 set of earbuds. I’ve tested low-cost models before, and while they sounded fine, there were obvious sonic sacrifices. With the Spirit Dot 2, I often forgot I was listening to a sub-$100 option. Anker crafted a big and boomy low range that doesn’t overpower. And when you factor in the small size of the buds overall, that feat is even more impressive.

Run the Jewels’ RTJ4 sounds just as big and loud as the artists intended, thanks to that low-end tone. But it’s not all about the bass with the Spirit Dot 2, there’s decent depth and good clarity to the sound profile as well. The audio is well-rounded, so in addition to hip-hop, genres like rock, metal, bluegrass and more all sound great on these earbuds. Don’t get me wrong, they’re not as immersive or full of detail as Sony’s WF-1000XM3 or Sennheiser’s Momentum True Wireless 2. But the Spirit Dot 2 are a good option for people who just need some decent sounding earbuds and don’t want to spend too much on them.

And it’s good that these don’t require any EQ tweaks in an app, because that’s not an option. Some of Anker’s earbuds work with a companion app, but the Spirit Dot 2 isn’t one of them (neither is the Spirit X2). That software offers a HearID test that customizes the sound for your ears, if you opt for a model like the Liberty 2 Pro. What’s more, you can employ over 20 presets or manually tweak the EQ yourself. It’s not really surprising that Anker would forgo the app for a more affordable set of buds, but you should know what you’re missing to save $70.

The touch controls on the Spirit Dot 2 are another area where Anker made some cuts. First, there’s no single tap to do anything. Everything is a double tap or a long press. On the right earbud, you double tap for play/pause. On the left, that action skips to the next track. There is no ability to go back to the previous song. You can summon your voice assistant with a long press on both earbuds simultaneously… and that’s it. There’s no on-board volume controls or anything else. I can deal with the limitations, but the assigned actions aren’t intuitive to me. I don’t recall ever using earbuds that don’t allow a single tap for anything.

When it comes to battery life, Anker promises five and a half hours but I averaged about an hour less. I was listening at full volume, so it makes sense I would get slightly less than the stated figure. But a full hour is a little concerning. The included case offers two full charges for a total of 16 hours of playtime when combined with the earbuds. Most true wireless options these days are closer to 10 hours on a charge, but they’re also more expensive. And I don’t know about you, but I rarely listen to a pair of earbuds for more than five hours in one go. While it is on the low end, the battery life on the Spirit Dot 2 will suffice for most users. Plus, a 10-minute charge will give you an hour of use if you’re in a hurry.

The Spirit X2 is an entirely different proposition — at least in terms of design. These true wireless earbuds are more like the Powerbeats Pro and other around-the-ear hook models. Like AirPods, the aesthetic is a matter of personal preference, but there are pros and cons to the form factor. Most notably, it won’t work with glasses or if you like to wear a hat during your workout or run. However, the hook does help keep these in place, which is something you might consider if you’re primarily using these for running or other physical activity with lots of intense movement. They’re also IP68 rated against dust and water, and Anker says its SweatGuard tech protects against the corrosive effects of perspiration.

Due to the design of the Spirit X2, Anker located the controls in a somewhat awkward spot. They’re on the front edge of the buds, facing forward and away from your ear. It took some time for me to remember the buttons weren’t right on my ear like so many other true wireless models. Even the Powerbeats Pro had controls on the portion of the earbud that’s right by your ear canal. Anker again put its own spin on how the controls are organized, so there’s a bit of a learning curve there too.

There are two physical buttons on each side, both of which accept either a single, double or a long press. On the right side, the top control handles volume up with a single push or skips tracks forward with a press-and-hold. On the left, the top button volume down and skipping songs backwards — with a single or long press, respectively. The bottom controls on both sides will play/pause, no matter which one you hit (there’s no automatic pausing feature). They also both turn the BassUp feature on or off with a long press. Lastly, to activate your voice assistant, you double press the bottom button on either earbud. Once you learn the layout, these controls all work well, and I never encountered issues where the Spirit X2 didn’t accept my presses — or confused a double for a single.

Like the Spirit Dot 2, the Spirit X2 enhances the workout features with powerful bass. That includes algorithmic BassUp tech working alongside a so-called BassTurbo acoustic chamber for increased resonance. Again, there’s a number of things Anker has put on paper here, but the simple fact is the bass is impressive for a set of $80 earbuds.

BassUp handles the boomy drum beats of RTJ4 much better here than on the Spirit Dot 2. This isn’t surprising given the design specifically created to enhance low-end tone, but the difference is significant. There’s a good amount of bass already, but the BassUp feature takes it up a few notches. Honestly, it’s too much for me at times, but I appreciate that this might be exactly what some people are looking for. A lot of true wireless earbuds struggle with bass, and the ones that do a decent job still aren’t this bombastic. If you like a lot of low-end during your workouts, these will certainly serve you well.

The clarity of sound is also nice on the Spirit X2. Less bassy genres sound good, with albums like Watkins Family Hour’s folky acoustic Brother Sister having the airiness that pricier headphones give the songs. Instead of compressing a collection of guitars, fiddle, bass and drums to flat noise, you get a sense of dimensionality. You can hear details like string noise and picking in the guitar playing, and all of the instruments actually sound like they’re in a big room together rather than just a series of ones and zeros smashed together on a computer. Overall, I prefer the sound quality on the Spirit X2 to the Spirit Dot 2 for its better bass performance and increased depth of sound.

The Spirit X2 is also better suited for calls. While the Spirit Dot 2 certainly works for that purpose when you need it to, the Spirit X2 has cVc 8.0 noise reduction that isolates your voice. If we ever go back to the gym, that could be handy. It could also be helpful if you’re running in a noisy neighborhood or another loud spot. Indeed, both of these Soundcore models cover the basics in terms of call quality, but like overall audio, the Spirit X2 is the better choice.

Anker says the Spirit X2 will last for nine hours on a charge. Much like the Spirit Dot 2, my tests came up short: around eight hours and 15 minutes. Again, not ideal, but the discrepancy wasn’t quite as bad as what I encountered on the Dot 2. And, of course, I was listening at full or almost full volume most of the time. Not everyone will do that, so your mileage may vary. The case holds enough juice for an additional three charges or 27 hours worth of play time. Like the Dot 2, it has lights on the outside that give you an estimation of remaining battery life.

The obvious comparison here is the Powerbeats Pro. Though the Beats model is frequently on sale, it will still cost you around $180-$200 ($249.95 full price). While hands-free Siri and Apple’s quick pairing are nice, and the Powerbeats Pro have better audio quality, you have to decide if that’s worth an extra $100. And the case for these Soundcore buds is much smaller than the absurdly large accessory that holds the Powerbeats Pro. Plantronics also offers a decently affordable hook design with the BackBeat Fit 3150. Battery life is solid there, and the company covers the basics, but the price is $150 — $70 more than the Spirit X2.

Anker’s Soundcore line has two more compelling and affordable options with the Spirit Dot 2 and Spirit X2. The latter definitely outshines its sibling in terms of audio quality, but the hook design won’t work for everyone. You really have to commit and be comfortable with the more obvious design when wearing the X2 for more general use. Still, both of these models are worth considering for $80 as the all-around performance is solid and reliable, even if there are a few features missing.