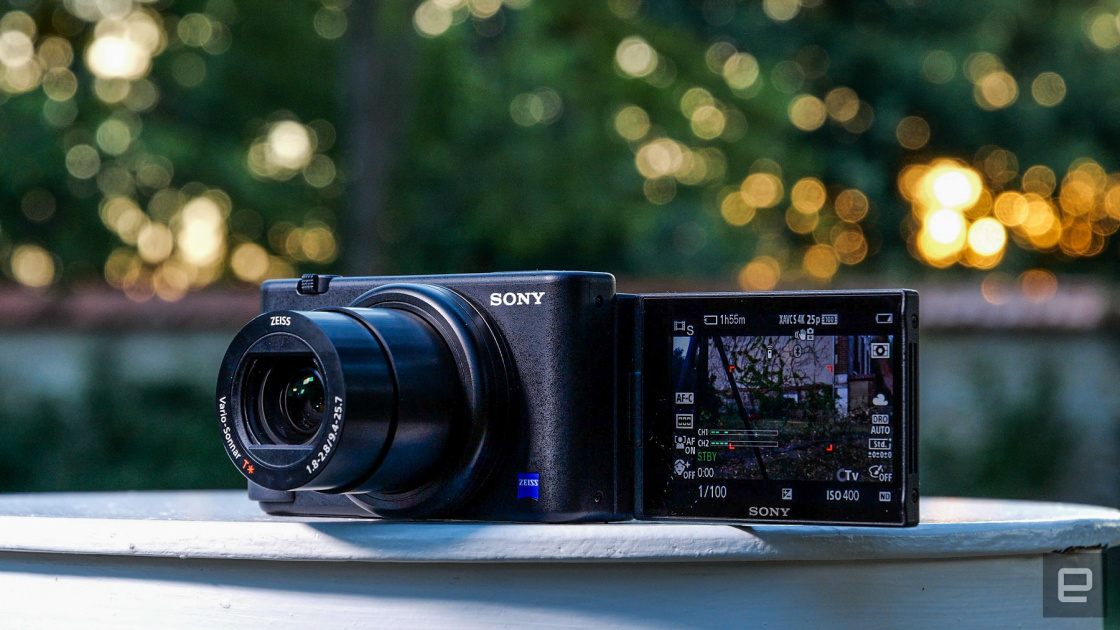 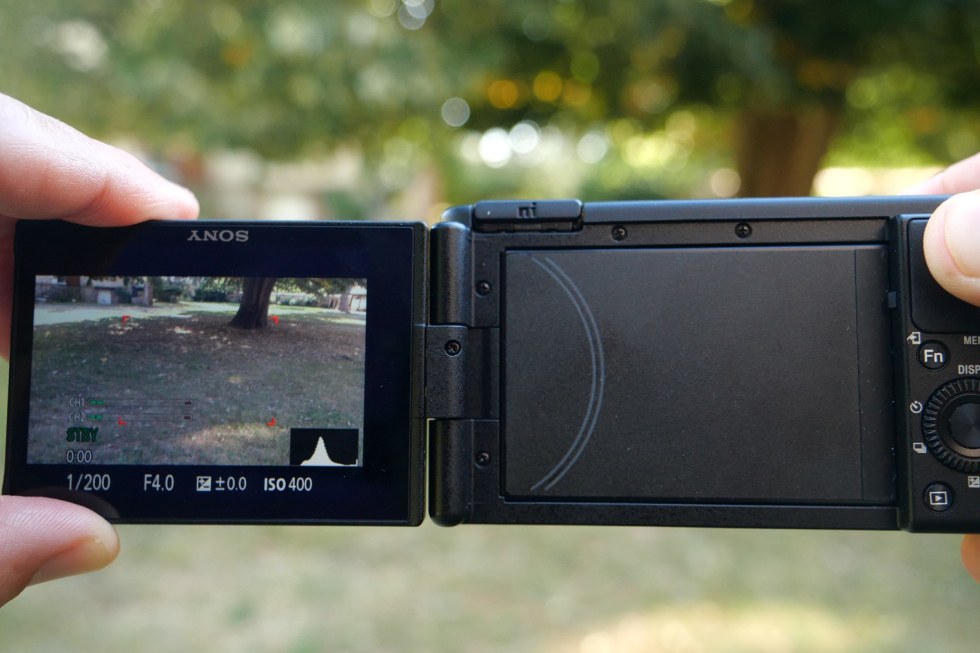 While you can use a Gorillapod or other portable mini tripod, Sony offers the ZV-1 in a kit with a shooting grip (along with a 64GB SD card). That gives you controls for things like zooming and recording, while converting into a mini-tripod via the retractable legs. I didn’t get a chance to use one, but with the controls and convenience, it looks like it’s worth the extra $150.

As with most Sony cameras, you can use the touch display to set a focus tracking point, but not control the main or quick menus. That makes it hard to change controls when you’re vlogging, as you have to reach around the back to manipulate the control wheel.  Every other camera brand allows touch menu control, so again, it’s strange that Sony keeps holding out on this.

That’s a significant miss for a camera like this, which has very few manual controls, apart from several buttons and the wheel. It would make sense to use the nicely laid out quick menu controls, but it’s a royal pain to do so while vlogging without touch control.

Because of all that, Sony really wants you to use the camera in automatic mode and as you’ll shortly see, it does have some unique features that make that easier.

Unlike most of the solid metal RX100 series, the ZV-1 has a plastic body. It’s not weatherproof either, so this won’t make a great action camera and you wouldn’t want to go vlogging in a storm.

The ZV-1 has a single UHS-I SD card slot, but this is a rare model where that’s kind of OK. There’s clearly not enough space for two cards, and UHS-I is fast enough for 4K 30p video. It’s not ideal for burst photo shooting, but if you need that, get the RX100 V.

Another unwelcome blast from the past is the nearly obsolete micro-USB rather than USB-C port. That makes charging directly from the camera a bit slow, though the battery is so small it barely matters. In fact, it only lasts about an hour when you’re shooting 4K, so you’ll need multiple batteries and a charger when you go out for the day. Finally, on the plus side, the ZV-1 has a new, bigger record button and a tally light –yes! — that shows you when you’re recording.

Now let’s talk about shooting video with the ZV-1, starting with the 24-70 mm f/2.8-4 lens. It’s fast enough for most types of shooting, but I would have preferred if to be a bit wider. It could particularly be a problem for folks with big heads/hair and/or short arms.

While 24mm might seem wide enough at first, you can’t really use that zoom level for vlogging because of the stabilization. The optical stabilization alone adds no crop, but it can’t smooth out jolts when you’re walking or doing sportsy things. The active electronic SteadyShot stabilization makes vlogging very smooth, but it crops by about 25 percent.

Unlike most other Sony cameras, the ZV-1 stores gyroscopic data. That means you can go in after the fact and smooth your footage using Sony’s Catalyst Browse app — even if you had stabilization turned off. The results are better than what you’d get using Premiere or Resolve software alone. However, you’ll still get a small amount of cropping.

The best feature on this camera, by far, is the autofocus that’s borrowed from Sony’s latest RX100 VII and mirrorless cameras. As with those models, it keeps you locked in focus, even if you turn around or move out of frame. To track moving subjects, you just touch it and the camera will follow it around reliably as long as it’s distinctive from the background.

Face and eye detection is crucial for vlogging and can be flaky on other cameras. On the ZV-1, however, it’s nearly perfect. The only time it let me down was when I suddenly moved from dark to bright lighting or if there were two faces in the shot. I found it did work better if I slowed the focus settings down a notch. Note that the ZV-1 does have animal eye AF for a variety of pets and wildlife, but it only works for photo and not video shooting.

A lot of vloggers like to flaunt products like phones or makeup. The ZV-1 makes that far simpler with a new feature called “product showcase.” If you’re vlogging and you place any object in front of the camera, it will instantly focus on that rather than your face. That saves you the trouble of having to tap the screen to switch focus, potentially jostling the camera or missing the shot. Keep in mind that this feature must be used with a tripod, as the SteadyShot stabilization is disabled. Face/eye AF is turned off as well, switching the camera basic area AF.

Another very cool autofocus feature is background defocus. That opens up the aperture as much as possible so that you can stand out against a nice, soft bokeh background. In fact, all the camera does is select the minimum aperture possible (and balances by changing other settings), but there’s no fiddling — you just have to hit a single button.

This can even work outdoors, because the ZV-1 has a built-in neutral density (ND) filter. It darkens the image by three stops, so there’s no need to crank the shutter speed to 1000th of a second or beyond. Using fast shutter speeds like that can create a staccato Saving Private Ryan effect, rather than smooth video with a slight amount of motion blur that most vloggers want.

Keep in mind that there’s also a caveat with the ND filter, namely that you get no “auto” setting for it in any of the main video modes — you’ll have to manually turn it on or off. That’s too bad, because it would be nice if it kicked in automatically for use with the background blur mode.

Another handy feature for vloggers is the soft skin effect (shown above). It uses AI to smooth out any blemishes or other skin issues, though it makes you look a bit plastic at the most aggressive setting. I think most folks would do well to avoid anything but the mildest “low” setting — and speaking from experience, don’t forget to turn it off if you don’t want it.

Auto exposure mode is usually a no-go for vloggers, because most cameras change exposure settings in a jerky, distracting way. However, the ZV-1 has a special face priority exposure setting. What it does is keep the exposure on your face constant, even if the sun goes from behind you to in front of you.

Better still, when the lighting changes, the ZV-1 ramps the exposure smoothly. That makes it possible to shoot in shutter or aperture priority mode without messing up your shots — perfect for beginning vloggers who don’t yet know how to shoot in manual mode. If you do want to shoot in a completely manual mode, however, the ZV-1 can handle that too, of course.

As with other cameras in the RX100 series, the ZV-1 offers excellent video quality for a camera with such a small sensor. Video is shot using the entire sensor with and supersampled to 4K, so video is sharp and there are no issues with aliasing (jagged lines) or moire (color fringing). As with other recent models, Sony has tweaked the color science in the ZV-1 for more realistic hues, especially in the skin tones.