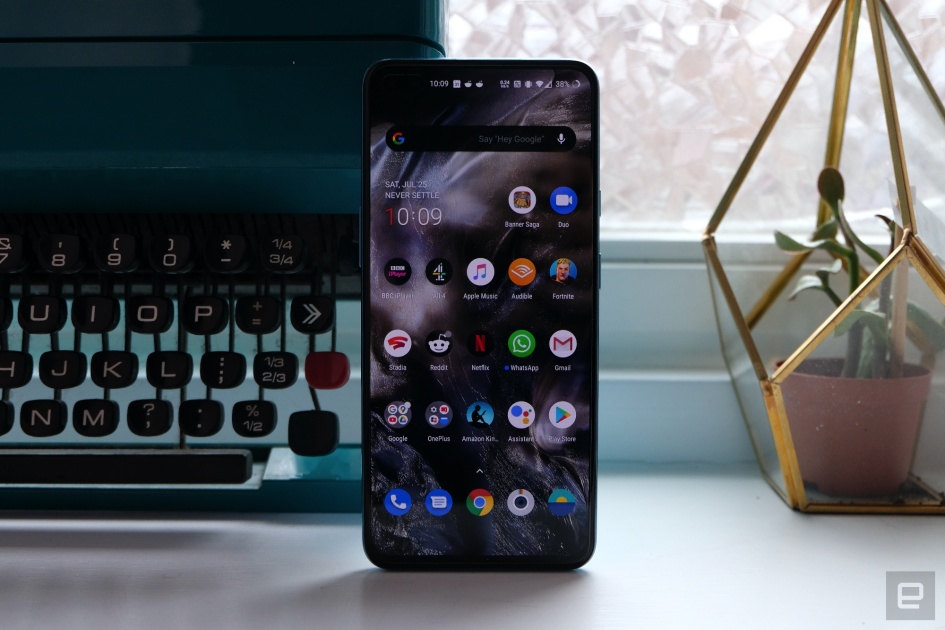 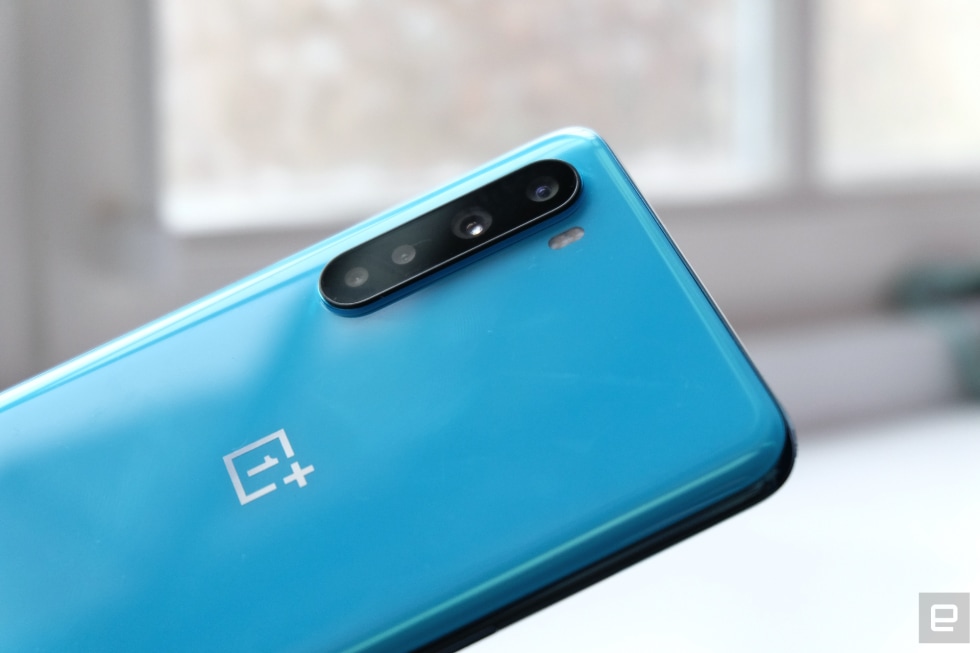 Let’s set aside the fact that the OnePlus Nord isn’t launching in the US. Even if it’s not, mid-range phones are having a moment on both sides of the Atlantic. From the iPhone SE to Samsung’s Galaxy A series and Google’s Pixel 3a — and soon the Pixel 4a — everyone is trying to sell non-flagships to the not-early adopters.

Out of that group, I think the OnePlus Nord is the best approximation of a flagship smartphone. Maybe it’s the large size, equivalent to other OnePlus flagships and my trusty iPhone 11 Pro Max. Or maybe I’m easily impressed by a litany of camera sensors. Whatever it is, the Nord gives off that expensive phone vibe.

I also appreciate it when phones land in interesting colors. I really like this blue hue on the Nord. There’s a more subdued gray onyx version too, if you don’t like fun.

Vivid colors aside, OnePlus always offers a decent selection of cases with its phones. In addition to some artsy options, my review unit came with a grippy plain black case; a cyan case; and clear case for people who don’t want a case, but need a case. (It’s the middle-seat of phone cover choices: No one should be happy with a clear case.)

Now, this phone is not quite the same as the OnePlus 8 or 8 Pro. There’s no curved display on the Nord, ensuring it was cheaper to make. It also has a nasty, cheap-feeling screen protector glued onto the front of the phone, with a rather rough edge that catches on your fingertips. It’s probably the one major tell that this isn’t a top-of-the-line phone, going on first impressions. That said, this protector already ‘saved’ my screen from some scratches but they’re already very noticeable. I promise you I haven’t already dropped the thing.

There are other obvious cost savings. The frame itself is plastic, not metal, though it has a metallic finish to trick you. If you’re a OnePlus die-hard, rest assured the alert slider is still present and hewn from metal. I don’t understand the relevance of the alert slider in 2020. I get that some people love it, but it feels like a dedicated camera button. Its time has passed. OnePlus could have saved some money here by dropping it — but maybe then the Nord wouldn’t have been “OnePlus” enough?

Like Samsung’s Galaxy A51, there’s no water resistance IP certification — another cost-saving measure. I’ve taken it for a sweaty run and it survived that encounter. But there are no guarantees it won’t possibly be damaged from rain or your own workouts.

The Nord can hold dual SIMs and, because it has a 5G modem, this makes it pretty interesting. Or, it will. The phone takes dual 4G SIMs or a single 5G SIM but mixed 5G+4G support is apparently coming in a future software update, ETA unknown. With 5G not quite there, the ability to switch carriers around would have been pretty useful. Maybe in the future it will be.

The phone also supports OnePlus’ Warp Charge 30 feature, though oddly it has the older USB 2.0 port on it. Not a major issue, but a little dated. OnePlus estimates you can take the phone from 0 to 70 percent charged in just a half-hour, and they are not wrong. Your next compromise at this price is a lack of wireless charging — a feature that OnePlus had only just introduced to its phone lineup earlier this year.

You’re either into wireless charging (because you own a charger) or you have little to no interest in it. I work at Engadget so I have, I think, four wireless chargers in my house alone. I may have absent-mindedly tried to charge the phone on charging pads. I missed this feature here.

The Nord has a 4115 mAh battery which is a decent size for a middleweight phone. During my time with it, the phone seemed to perform admirably, keeping the 90Hz display setting on throughout my time. Burning the battery down through video, I got roughly 13 hours of playback. With more typical use, I’d usually end the day around the 50 percent mark. It always lasted through a day of pretty intensive usage, including some gaming, video watching and intermittent camera use.

Let’s circle back to the screen, because a 90Hz display on a smartphone is remarkable at this price. What does it do? It makes your phone life smoother — if the apps support it. I’ve spent time with 90Hz and 120Hz screens, and it’s always jarring to ‘settle’ for the 60Hz status-quo when I shift back to my iPhone. Yes, you could get a 120Hz screen on the OnePlus 8 Pro and the Pixel 4, but you’ll have to pay flagship prices for anything beyond 60Hz.

With 1080p resolution, however, it’s not the crispest screen in the world. And with this large a screen size, you might be able to notice it. It’s also a compromise: higher refresh speeds do have an impact on battery life. Dropping the screen resolution is a way to cover those power commitments. And, If you want, you can hard-set the phone to run at 60Hz, and pocket the battery-life boost.

The AMOLED screen itself is bright and punchy. Like most Android phones, you can choose the degree of punch you want from the screen in settings, but I’ve usually ramped it up to max, if only to make my photos pop.

There are no pop-out selfie cameras this time around, and OnePlus decided to go with a dual-camera array, so it’s less of a holepunch and more like a pill punch. That’s not a word, I know. You’ve seen a similar setup on Samsung phones in recent years, and indeed, this is another design note that suggests a high-end device.

When it comes to buying a mid-range phone, it used to be that the experience was rougher around the edges. More app churn, more sudden crashes. Thankfully, I rarely saw that during my week with the OnePlus Nord. Like the LG Velvet, another recent mid-range phone, it’s one of the first devices we’ve tested with Qualcomm’s Snapdragon 765G processor, the chip maker’s first silicon to integrate a 5G modem. (Phones with the Snapdragon 865 processor still require a separate 5G modem.)

It might be due to the 90Hz screen, but most of the time everything ran well. More graphically dense games like Fortnite caused frame-rates to take a bit of a hit, however. The processor did sometimes choke with websites in Chrome, struggling to stream embedded videos. Most of the time, though, I didn’t feel the Nord was lacking in power. If you want a powerful gaming phone, you’ll have to look elsewhere — and pay more. That said, I did manage to play plenty of Stadia titles on this phone without issue. You don’t need a lot of processing power to stream Tomb Raider and Mortal Kombat from a phone.

OnePlus says it’s made hundreds of tiny optimizations on the Nord, and it does indeed deliver an experience you don’t often see at this price.

It helps that OnePlus also makes good Android software. Sure, it feels a little branded, with red highlights here and there, a few OnePlus specific apps you’d probably never touch. But I’m oddly cool with it; I don’t mind being identified as a OnePlus user. When you boot up the Nord, all that OnePlus bloat is neatly contained in a little folder. It’s already out of the way and out of your face.

When our own Chris Velazco reviewed the OnePlus 8 Pro earlier this year, he concluded the fingerprint reader was rubbish, but with the Nord I had no issues. The in-screen reader was quick to unlock, and there’s the option of face unlock too, if you’re comfortable with those kinds of biometrics.

Cameras for most things

More cameras are usually better, though there are obvious exceptions to the rule. With the Nord, the main camera captures 48-megapixel images, with an f/ 1.75 lens augmented by optical image stabilization — still rare in mid-range phone cameras. The camera defaults to 12MP stills, shedding those pixels for crisper shots. The high-resolution sensor means you get a 2x zoom function and you can still go for full-fat 48MP shots if you want. I preferred the standard setting, personally.

There’s also an ultra-wide-angle 8-megapixel camera and a mostly pointless 2-megapixel macro lens. The final sensor is a depth camera for portrait modes. All told, it’s an unusual mixture of OnePlus 8 and OnePlus 8 Pro camera specs.

Surprisingly, most of my images came really out well. OnePlus often has a reputation for underdelivering on smartphone cameras, but that wasn’t the case with the Nord.