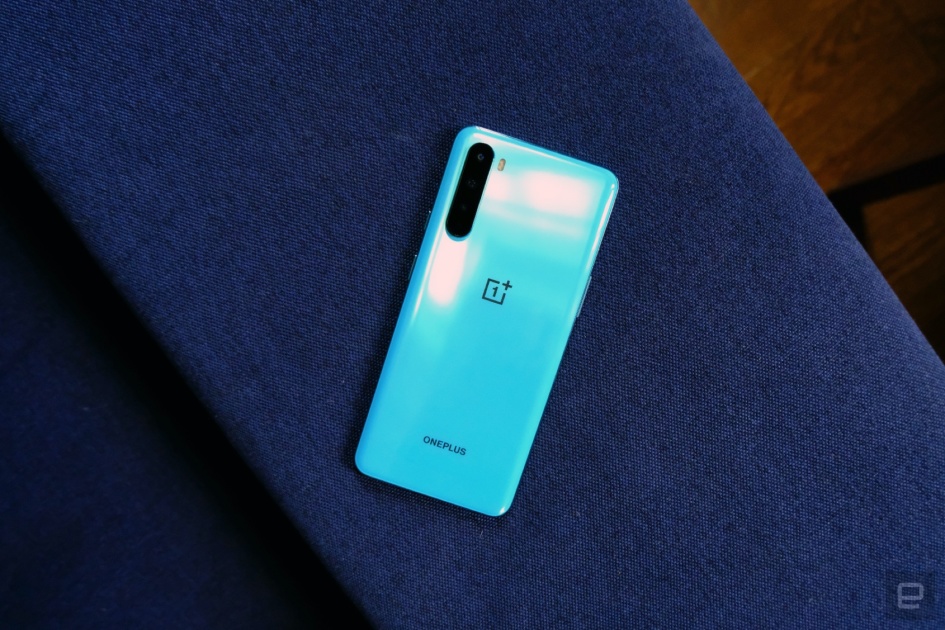 Notably, for a phone in the Nord’s price range, the screen can run at 90Hz, making for a smoother viewing experience than most smartphones that have 60Hz screens. That said, some other pricey handsets have reached 120Hz. It’s still a nice upgrade from the status quo, especially if you’re not used to faster refresh rates on your phone.   (You can adjust the screen setting to 60Hz if you’re looking to conserve battery life, too.)

The Nord also has an in-screen fingerprint sensor, but thankfully, this one seemed to work way much better than the one found on the OnePlus 8 Pro. So it beats out the company’s own flagship device in that regard.

The Nord offers some flagship razzle-dazzle in its color options too, with options that include a subtle matte gray and a shimmery sky blue. I tested the Blue Marble model (there’s a Grey Onyx option too) and the finish has some optical depth to it. The translucent effect is similar to what you might have seen on Huawei devices in recent years, and I’m a fan. Anything that’s not boring shades of black, blue and white should be embraced. Your opinion, however, may differ.

In an interview ahead of the Nord launch,  OnePlus boss Carl Pei told me that this was the time for the company to target “a wider audience.” You might remember the OnePlus X — though it’s probably best if you don’t.

In an ill-fated experiment back in 2015, the company tried to offer the OnePlus experience for under $300, but the One ultimately too many sacrifices were made. In particular, the OnePlus X had poor camera performance and middling LTE support.

Pei says that the Nord is a different device, simply because the tech available to phone makers like OnePlus has improved so much. “With the Snapdragon 765G processor, the speed is there, the power efficiency is there,” he said. “We can offer a similar experience [to flagship phones] on a mid-range product.”

And, judging from my time with the Nord so far, he’s not wrong. It mostly works like a flagship Android phone would. Animations and app transitions are smooth and swift, and the phone can tackle a quick game on Stadia, or running off the phone, without choking. OnePlus has apparently made over 300 optimizations to the Nord to make the most of Android 10 and Qualcomm’s Snapdragon 765G, which adds 5G to the feature set too — still a relatively rare mid-range phone feature. This processor is also built on 7nm architecture which means it should be relatively power-efficient. The Nord also comes with a 4100mAh battery, so it should last a day or two between charges — OnePlus doesn’t offer any estimated battery life figures.

The cameras on the back are in the same ballpark as this year’s flagship OnePlus phone, although there are a few differences. It’s a four-sensor unit, which includes a depth sensor for portrait mode, a 2-megapixel macro camera and 8-megapixel (down from 12-megapixel on the 8 Pro) ultrawide sensor, and most importantly, that primary 48-megapixel sensor. This is the main camera, with a notably low f/1.75 aperture rating (smaller f numbers means more light into the camera sensor) as well as optical image stabilization, something that often gets left out of middleweight smartphones. Both put together should make the Nord capable enough in low-light, but let’s reserve judgment until we can complete our full review.

Typically, the camera app captures 12-megapixel stills, but you can tweak the settings to take in all 48 megapixels of detail. The original setting, however, opens up options with a 2x optical zoom. It’s nice to have, but it would have been unremarkable were this a top-of-the-range phone. C’mon, we’re dabbling with 5x zoom and more these days. Video-wise, you can capture 4K video at up to 30 fps; 1080p video at up to 60 fps; and a super slow-motion mode at the same resolution, with a framerate of 240 fps. In short, Nord has most of the video features you’d expect to find.

Shooting modes include long-exposure ‘Nightscape’ mode, and OnePlus have factored in some lens-distortion algorithms to rescue ultrawide-angle shots that may stretch the subject of your images. It’s a smart choice, though it’s a little hard to see without testing the camera further. Early impressions of the cameras: They seem good. So far. At least, they’re as good as the OnePlus 8 Pro, which, yes, probably won’t surprise you.

The company appears to have made a strong showing with the Nord’s cameras specs — which is a good thing. It’s often been the weakest area for past OnePlus phones. The company believes the Nord is a big deal. And it probably is, even if the phone doesn’t appear epoch-defining spec-wise. My early impression is that it’s well-built and stylish. The spec sheet tells only half a story, though: what you get. But what does the Nord skip on?

At £379 ($480), OnePlus made compromises. Some of these decisions, like the cheaper Snapdragon 765G processor, matter less than others. Maybe you want IP water certification (that’s not included here) or wireless charging (also absent). But you have to ask: Would you pay double for those features? Probably not. There will be two storage options when the phone launches in Europe and Asia. The cheaper device comes with 8GB of RAM and 128GB of storage, or you can pay £469 ($595) for 12 gigs of RAM and double the storage. There is still no word on US launch plans.

The OnePlus Nord has piqued my interest. Expect our full review soon.