What to buy your dad who’s hopelessly low-tech 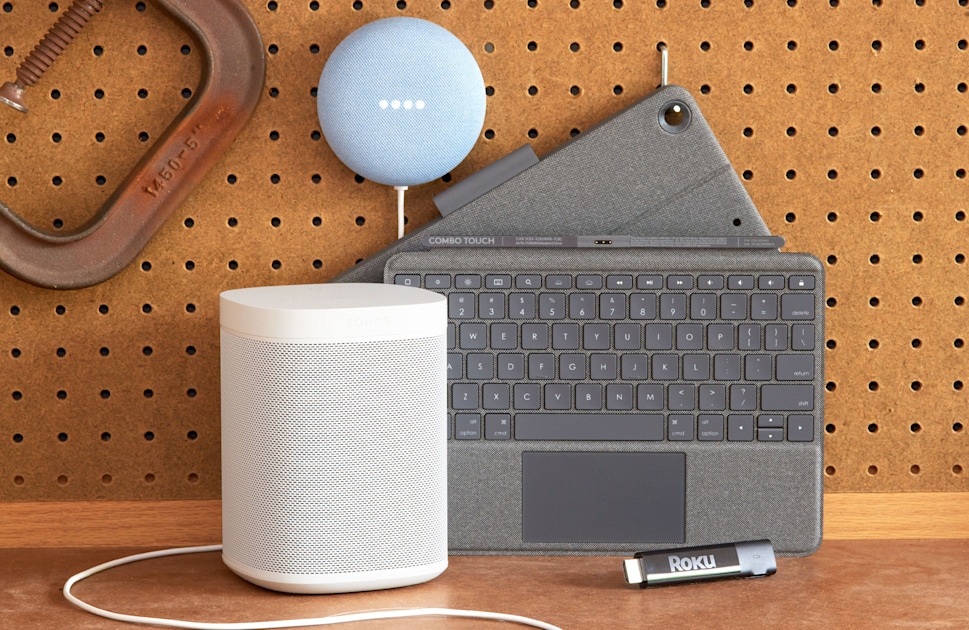 You would think that as his personal tech support line, I would avoid ever giving him a tech gift. In fact, I hold out hope that the right gadget can make his life in retirement easier and maybe even more fun. The products below are all things I’ve bought him myself, have recommended that he buy or am thinking of getting him now. Don’t worry, I’m not spoiling anything: My dad isn’t the type to read Engadget.

I would have preferred my father buy himself an iPhone: iOS is the platform my brother and I both use, which would have made it easier to give dad instructions when he calls for tech support. But Pop, ever the contrarian, walked out of the store with a Samsung Galaxy J. All iPhones are too expensive, he says, and he’s even more suspicious of the way Apple handles personal data than he is of Google or Amazon. (OK, then!)

Depending on how stubborn your dad is, the privacy debate could be a lost cause. But at least now you can surely convince him that not all iPhones are overpriced. The new $400 iPhone SE offers the performance of an iPhone 11 squeezed into the body of an iPhone 8. Whereas in my dad’s case, I would have been asking him to buy an old iPhone 7 before it went out of stock completely, someone buying the new SE is getting the same performance as Apple’s other current flagships, thanks to a common A13 Bionic chipset. You also get a surprisingly good single-camera setup, with a 12-megapixel shooter,  f/1.8 aperture, six-element lens and optical image stabilization. Not too shabby. All told, the main things you’re giving up for this $400 price are Night Mode and 5G connectivity. But again, dads like mine won’t miss those things anyway.

My dad is an Apple skeptic (more on this later). So for him, suggesting an iPad-and-keyboard combo as a laptop replacement would never fly. But for your dad it might, especially if he’s mainly interested in streaming video and handling a mix of basics like email and web browsing. Now in its seventh generation, the standard-issue 10.2-inch iPad ($330 plus) has seen enough refinements that it should be enough for most people, especially the sort of dad who’s the opposite of a gadget connoisseur. In our review, we particularly appreciated its long battery life and fast-enough performance, especially at that price. And if means allow, we also recommend quadrupling the storage for an extra $100.

The tablet will be enough on its own for Netflixing and checking baseball scores (if we ever have live sports again), but if you have the cash to spare, you might consider throwing in a third-party, detachable keyboard. I’d go for Logitech’s $150 Combo Touch Keyboard: Logitech often builds better iPad keyboard accessories than Apple does for its own products. In this case, I’m intrigued by the trackpad, backlit buttons and three usage modes that are designed for typing, viewing and drawing (even if your dad might not appreciate that last one). As a bonus, if your dad already owns an iPad, this keyboard offers decent support for older models.

Every few years I help my dad buy a new laptop. The first time it was a pint-size ThinkPad with an underpowered processor. Last time it was an inexpensive 15-inch notebook from Acer. If he were in the market today, I might choose a Chromebook. As his vision has faded, it’s more difficult for him to play his favorite game, Minesweeper, which means everything he could possibly want to do can be accomplished through the Chrome browser. I’d love for him to be as minimally involved in software updates and security scans as possible, and for him to never again see a malware pop-up (one can dream).

If I were shopping today I’d pick the ASUS C425. We generally like ASUS Chromebooks around here. This one’s affordable at less than $500; its 14-inch screen is on the slightly larger side for my dad’s strained eyes; and the keyboard, trackpad, performance and battery life are all solid, according to reviewers. Yes, there are nicer Chromebooks, but in no way do I recommend spending $800 on one, especially if your giftee won’t even appreciate the difference.

Even if a full-fledged smart speaker like the Sonos One or HomePod isn’t in the budget, you might consider a smaller alternative. Ultimately, the choice between the $50 Amazon Echo Dot and the $50 Nest Mini comes down to your dad’s virtual assistant of choice — if he even has one. All things being equal, we gave the Echo Dot a review score of 87 and the Nest Mini a similar 86, but it’s worth noting that we found Google’s mobile app easier to navigate. That could be a decisive feature if you’re shopping for a parent who’s a bit of a luddite.

While setting up multiple router nodes to ensure even coverage around the house might require some installation help, we’ve found in our testing that both Amazon’s Eero ($99 plus) and Google Nest WiFi ($169) are both easy to set up. Amazon’s offering is certainly cheaper and might even have a slight edge when it comes to ease of installation, but Nest’s speeds were faster in our testing. Plus, the Nest range extender doubles as a Google Home speaker, which in itself makes for a pretty sweet gift.

I admit: A password manager is probably just as much a gift to yourself as it is to your dad. After having to reset my parents’ Verizon, Amazon, Sonos and Spotify accounts one too many times, I started keeping a running list of all of their passwords. Is that secure? Probably not! But you know the adage: Do as I say, not as I do. If I were advising anyone who’s not me, I’d suggest hooking the parents up with a password manager.

There are lots of good options, though LastPass is the one I use myself. Regardless of which you pick, there are a few caveats here if you’re helping to set up low-tech parents. First, they’d have to remember their master password and not have it stored anywhere unsafe — like their email inbox. (BTW, have you had the talk with your parents about two-factor authentication?) You’ll also have to be confident your parents can navigate the “password manager prompt inside text fields” thing. I’m sure they can do it. Bonus points too if you can convince them to use LastPass or their browser to generate unique secure passwords.

If you go with LastPass, your parents might get by just fine with a free single-user account, but if they’re going to be sharing passwords with a spouse — or you, their personal tech support — the $4 monthly Families plan might be a better fit. The Families option allows for six users, emergency access and unlimited shared folders.

This gift idea is an oldie but a goodie: Give your dad who owns a TV, cable box, DVD player and possibly a streaming stick a universal remote to control them all. Logitech’s Harmony line has long dominated the space. If it were me, I’d go for the lower-end $50 Harmony 665. Reviewers say it has an easy setup process, with a Remote Assistant function for troubleshooting and a Help button. Keep in mind that the setup will require connecting the remote to a computer; setup through an app isn’t an option here.

With support for 10 A/V devices, it’s unlikely your dad is going to max out unless he has a really sick setup. (If your dad is like my dad, I bet he doesn’t.) The biggest possible drawback is that the IR sensor means your gadgets need to be in the user’s line of sight, and the remote won’t work with all modern devices, especially not smart home gadgets.

This is the streaming stick I bought for myself and that I wish I had bought for my dad. Instead, when I was on the fence between the Streaming Stick+ and the Fire TV Stick, I went with Amazon’s offering, thinking the more sophisticated voice control would be a boon for my dad and his low vision. What I didn’t consider is that Amazon’s device has a slightly less straightforward UI than the Roku stick, and that my dad wouldn’t want to learn to use a voice remote anyway.

Recently my dad called saying that his Fire TV Stick had stopped working and he was ready to buy a new TV because the one in the den was 10 years old anyway. (That escalated quickly.) I suggested this 55-inch 4K Roku TV from TCL for $400. He’s happy with the picture quality — and he was able to set up Roku all by himself.

Until a few years ago, my dad’s way of playing music out loud was plugging an aging iPod Classic into a wall-powered dock with a 30-pin connector and then dragging the whole thing between the living room, dining room and backyard deck. My solution for him was a single Sonos One speaker that he could set up in the living room, partway between the den, dining room and patio, allowing him to retire the Click Wheel and stream music off of his laptop instead. When he’s outside, he pumps the volume from indoors and leaves the screen door open — no more plugging and unplugging. (I’ve considered getting him a weatherproof Bluetooth speaker too, but there’s always the risk that it’s more technology to learn.)

There are other wireless speaker systems that Engadget recommends too, but I can say from my own experience having bought Sonos speakers for him and myself that these devices are easy to set up. For dads who trust Big Tech, there’s support for Amazon Alexa and Google Assistant. And AirPlay 2 support means you can stream Apple Music, in addition to other services like Spotify, Amazon Music, Audible, Pandora, iHeartRadio, Google Play Music and YouTube Music, among others.

I got my dad a Spotify Premium subscription in the same gifting cycle as I gave him the Sonos One. He was happy about the speaker, but I think he was even more thrilled about Spotify. To him, someone who always had to go to the record shop (and later Costco) to buy his music or catch his fave songs on the radio, something like Spotify was a revelation. Now he could hear a virtually infinite catalog of music he didn’t “own” and that he potentially experienced in his 70-some-odd years of living.

Not long after I got him on Spotify, my dad discovered a Clapton album he somehow had never heard. The service has also helped him stumble upon artists who are totally new to him — yet another way to help pass those retired days (and now quarantine). And yes, he’s figured out how to get around the UI with no tech support calls (unless for some reason he loses his Sonos connection). I don’t think he will ever become so advanced as to make use of the Discover Weekly playlists, but that’s no big loss.

In short, what you, I and other Engadget readers might take for granted* could be game-changing for your low-tech dad.

*Yes, you can easily swap out Spotify for Apple Music but, you know, this would work better if your dad were an iOS and/or Mac user, which stubborn Mr. Wollman is not.