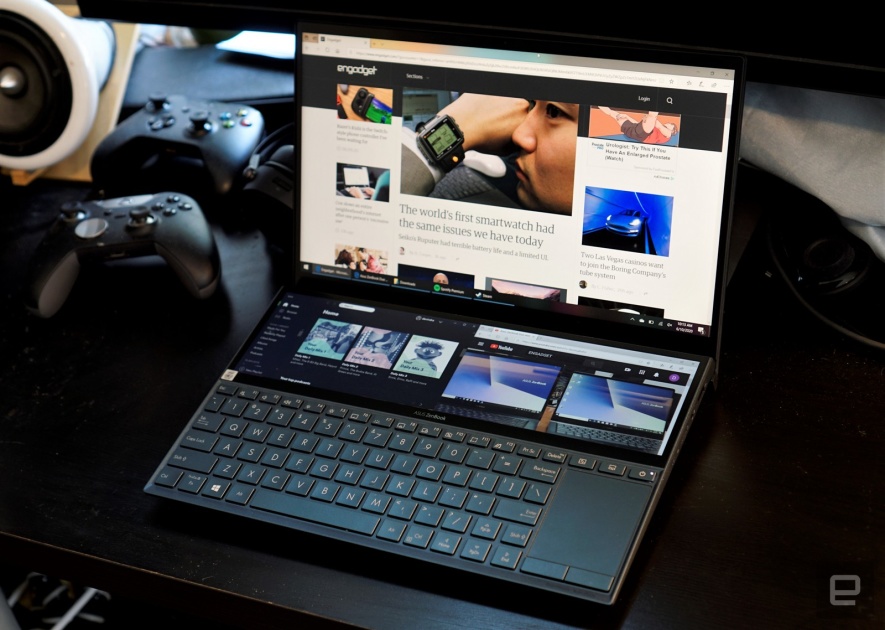 As you’d imagine, the ZenBook Duo instantly stands out from every other notebook when it’s open. But it’s another story if you’re not actually looking at the screens. ASUS is still relying on its metallic ZenBook case design, which is sleek and smooth to the touch. Its matte finish gives off an air of subtle refinement — certainly more than the shinier cases from past ZenBooks. ASUS also includes an array of useful ports, including two USB Type A connections, one USB C, HDMI and a microSD card slot. Unfortunately, it doesn’t support Intel’s fast Thunderbolt 3 standard, which is technically four times faster than standard USB 3.1.

Beneath the hood, the ZenBook Duo features Intel’s quad-core i7-10510U, 16GB of RAM and NVIDIA’s GeForce MX 250 GPU. ASUS likely opted for that NVIDIA GPU to better handle dual displays. It doesn’t really lead to much more performance compared to the XPS 13’s integrated Iris Plus graphics though. Both notebooks ended up scoring almost the same in the 3DMark Sky Diver benchmark, though the ZenBook Duo edged out a victory in the newer Night Raid test. And Overwatch was a bit more playable in 720p and even 1080p with lower graphics settings, thanks to more consistent frame rates.

Unsurprisingly, given all of its horsepower, the ZenBook Duo handled all of my productivity needs without issue. But I really appreciated having 16GB of RAM when dealing with dozens and browser tabs and other apps running on the secondary screen. This is a machine meant for multitasking, after all. The more memory, the better. It also lasted a surprising 11 hours and 55 minutes on our battery test, even with both screens on. The ZenBook Pro Duo, had a hard time reaching four hours.

If you’re considering the ZenBook Duo, the real question you need to ask yourself is how much do you really need two screens on a $1,499 ultraportable. ASUS did a decent job of fitting in a second display, but it leads to plenty of compromises. I wouldn’t go so far as to call the ScreenPad Plus a gimmick, but it’s not something most people actually need — not when you can get a thinner, lighter and cheaper machine like the XPS 13. Still, it’s a noble experiment — the ZenBook Duo stands alone in a sea of ever-similar ultraportables.