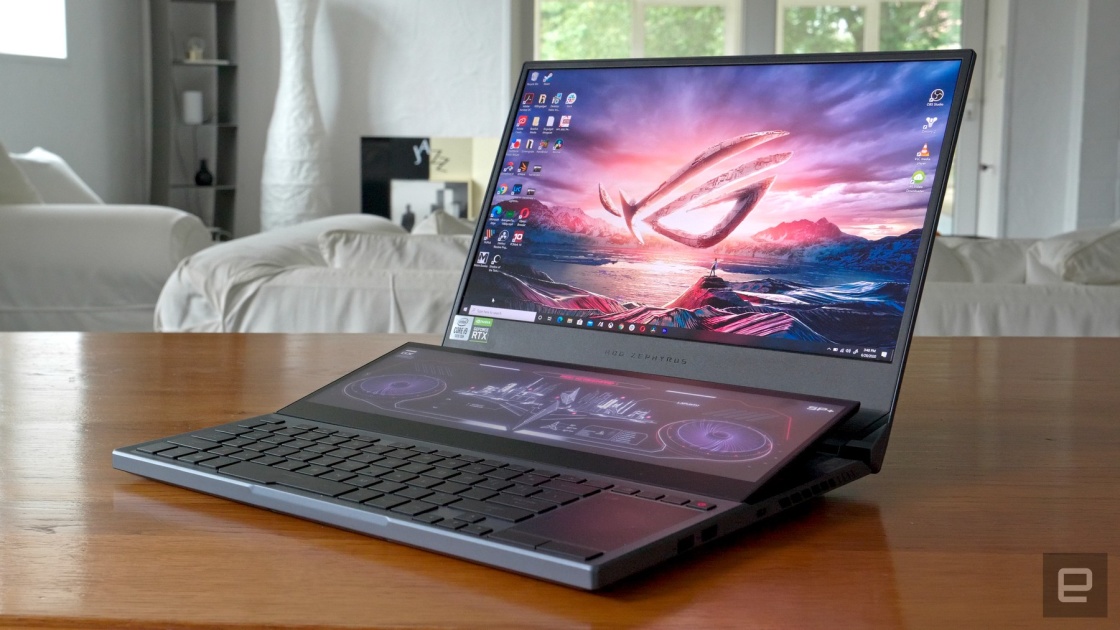 My review model had the 4K 60Hz display, but you can also get one with a 1,920 x 1,080, 300Hz gaming-oriented screen. The 4K model covers 100 percent of the Adobe RGB spectrum and both versions have factory-calibrated Pantone certification for accurate colors.

There’s a lot of power under the hood, starting with a top-spec Intel 10th-generation 8-core i9-10980HK processor that can hit 5.3GHz clock speeds for maximum gaming power. It also packs NVIDIA’s laptop flagship GeForce RTX 2080 Super Max-Q GPU with 8GB of GDDR6 memory. Rounding things off is an incredibly fast 2TB NVMe SSD RAID, 32GB of 3,200 MHz DDR4 RAM and a huge 90Wh battery. There are no compromises here.

Those high-end parts boost gaming both subjectively and objectively. Using Shadow of the Tomb Raider’s benchmark, I was able to hit 70 fps at 1080p and 29 fps at 4K (at “highest” settings), Hitman at 99 fps in 1080p ultra mode and Far Cry New Dawn (1080p, ultra) at an impeccable 90 fps. Metro Exodus, meanwhile, could run at 45 fps or so with DLSS and other RTX settings enabled.

These real-world speeds (and synthetic benchmark scores) are right up there with other RTX 2080 Super laptops like HP’s refreshed Omen X 2S and the MSI GS66, so the ROG Zephyrus Duo 15 is in elite company. The only differences are a few frames-per-second here or there, and that’s often down to the different ways companies handle cooling, GPU/CPU clocking and other factors.

Despite the huge battery, the Zephyrus Duo 15 had a middling rundown result for 4K gaming laptops. Considering what’s working against it, though, like the 4K screen and high-performance components, it fared pretty well. The second screen was disabled for this test, so turning it on is bound to suck the battery even more rapidly. And as with most laptops in this class, you’re not going to be able to game for long on battery power alone.

Games also looked sharp and immersive thanks to the enhanced Adobe color gamut and calibrated colors. ASUS doesn’t offer an OLED or HDR panel for this laptop, but the 4K and 300 Hz 1080p display (both IPS) are the next best thing. Meanwhile, the ScreenPad is a bit dim at max brightness compared to the main display, but it’s sharp and clear enough to let you monitor game broadcasts and do other chores.

On top of gaming, ASUS has touted the 4K version of the Duo 15 for content creation, pitching the idea of using the second screen as a place to put tools, timelines and other elements. With Premiere Pro, for instance, you can detach modules like the timeline and move them to the second screen. It was even easier with Davinci Resolve 16, which automatically switched the timeline down to the ScreenPad when I selected the “dual display” option.

It’s ideal for entertainment, too, letting you see shows from Netflix, Amazon Prime and other services the way their creators intended. It lacks HDR like the Gigabyte Aero 17 HDR, but the 400-nit display is brighter you can find on almost any other laptop on market.

Aside from the aforementioned lack of ports, it’s a stellar multimedia performer. The Handbrake 4K encoding test was the best we’ve ever seen on any PC, laptop or desktop. And I smoothly completed an entire 10-minute 4K HDR video edit on Davinci Resolve 16 with nary a glitch.

Can I say that the ASUS ROG Zephyrus Duo 15 is the first truly functional and attractive dual-screen laptop? I think so. It still has flaws, particularly the extra weight, reduced battery life and cramped keyboard. It’s also expensive, starting at $2,999 and running $3,699 as configured for this review. Meanwhile, MSI’s 15.6-inch GS66 costs $2,999 in a similar high-end configuration, a whopping $700 less.

If you’ve got the cash, however, the display gives it a very strong “want” factor, and it’s surprisingly useful for both game streaming and content creation. ASUS backs up the looks with very strong performance that’s among the best in its class.