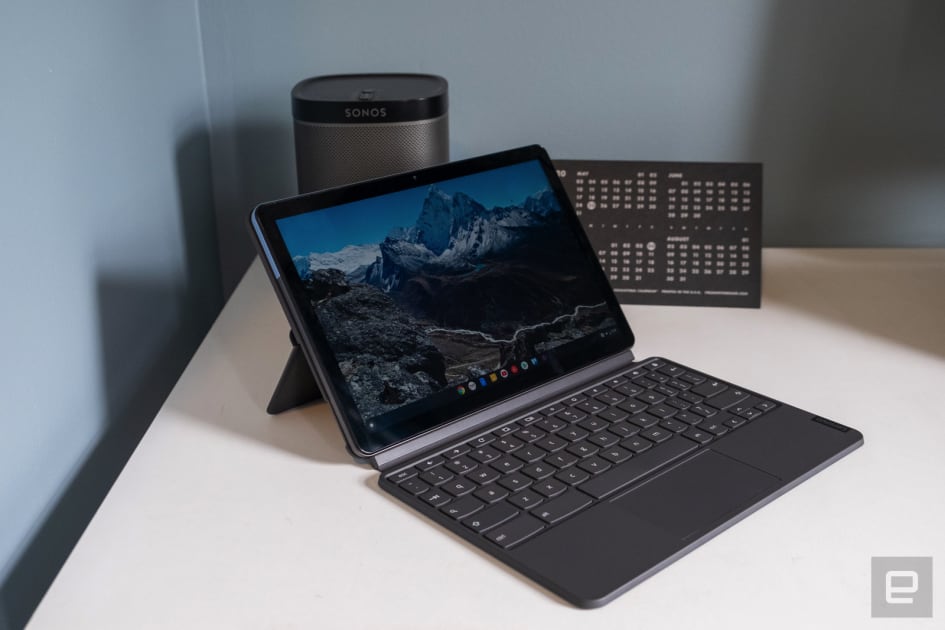 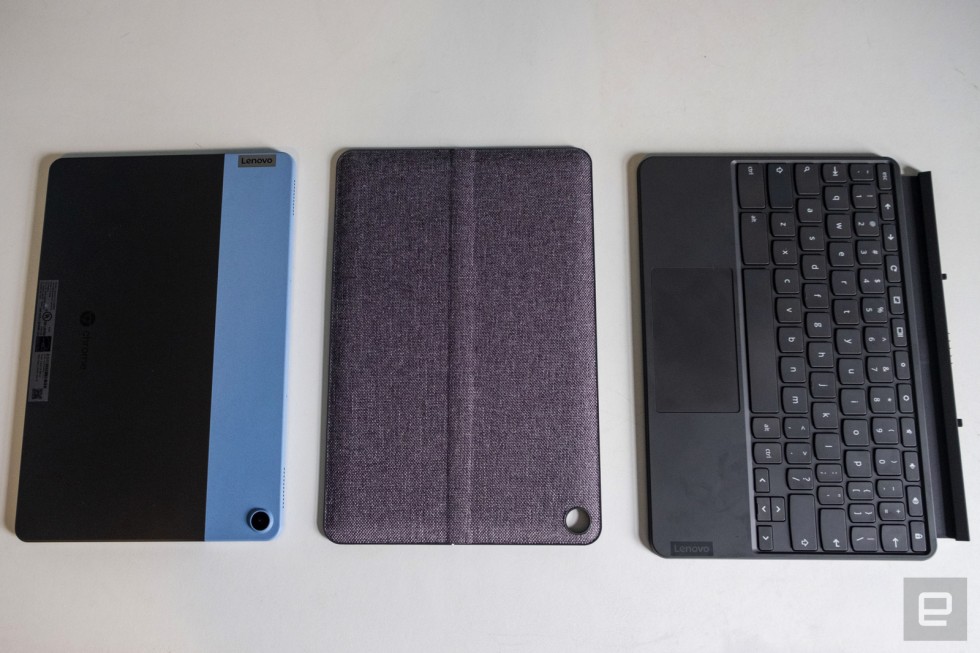 For starters, I have to give Lenovo props for including the keyboard in the box with the Duet. Basically, no tablets include a keyboard these days, even ones like the Surface and iPad Pro that market those devices almost exclusively with a keyboard attached. Even though Chrome OS works much better in tablet mode than it used to, it’s a platform that’s far more useful with a keyboard and mouse, so this accessory is perhaps even more essential here than it is on an iPad.

Using the keyboard itself is a mixed bag though. The width of the keyboard is just about identical to the Smart Keyboard Apple built for the 9.7-inch iPad Pro back in 2016. Apple only stuck with that size for one year before increasing the iPad Pro to 10.5 inches, which meant the keyboard got just big enough to be truly comfortable. The reason I bring up this comparison is that Lenovo had to make some major compromises to fit a keyboard into this limited space, and it makes things tough for extended typing sessions.

The biggest problem is easily the size of the non-letter keys on the keyboard’s right side, including delete, semicolon, quote, dash and so forth. Lenovo made many of these half-size, which makes them difficult to hit reliably. I’m surprised at how often I use the quote key, and I missed it far more than I would have liked while writing this review. As with all smaller keyboards, this one has a learning curve, but I never felt as comfortable on it as I did even on the small iPad Pro keyboard I mentioned earlier. That keyboard has full-size quote and backspace keys, which made a big difference for me.

The main letter keys are big enough to comfortably type on, which was a relief, but I do wish there was slightly more space between the keys. Again, going back to my iPad Pro keyboard, the letter keys are a bit smaller, but the extra space between them makes it easier for me to hit the right one. The trackpad, meanwhile, is also small but responsive and reliable. You know going into using a device this small that the input experience is going to be a compromise, but the trackpad was effective despite its small size. The keyboard, on the other hand, is too small for anything but casual use. I got used to it and typed most of this review on it, but I certainly wouldn’t want to do that again.

If I’m going to get any work done, I need a keyboard, so I mainly used the Chromebook Duet with its keyboard attached. I’ve explained the pros and cons of that keyboard, but even with its small size I was able to use it for hours at a time to get through my usual workflow. That said, I made some changes to how I usually get things done to accommodate the Duet’s small screen and weaker processor. Mostly, that means I ran fewer apps at once and leaned heavily on Chrome OS’ new virtual-desk feature.

My browser window, Slack and TweetDeck all got their own space while I kept a fourth open for apps that didn’t need to be full screen, like Todoist, Keep, Telegram and YouTube Music. I’d close out of those when I didn’t need them rather than let them run in the background as I might have done on a different computer. It took some getting used to, but once I found the setup that worked for me I was able to be nearly as productive as I would be with a bigger screen.

Of course, it’s not something I’d want to do for 10 hours at a time, but it certainly worked a lot better than I expected. The screen is sharp and bright enough, but the bigger surprise was how the Duet held up with its MediaTek processor and 4GB of RAM. For the most part, multitasking was fast enough, and I didn’t experience a lot of slowdowns or hiccups during music playback. That said, tabs reloaded pretty frequently when I navigated away from them due to lack of memory. It’s not a computer that I’d want to push continuously for a long time, but it’s totally usable for basic tasks.

As for the battery, it was another highlight. It didn’t quite make Lenovo’s predicted 10 hours in a battery test that looped an HD video downloaded to the Duet’s local storage, but eight and a half hours isn’t bad. And it seemed to actually last longer in my normal routine: I hit that 10-hour mark a few times during the workday.