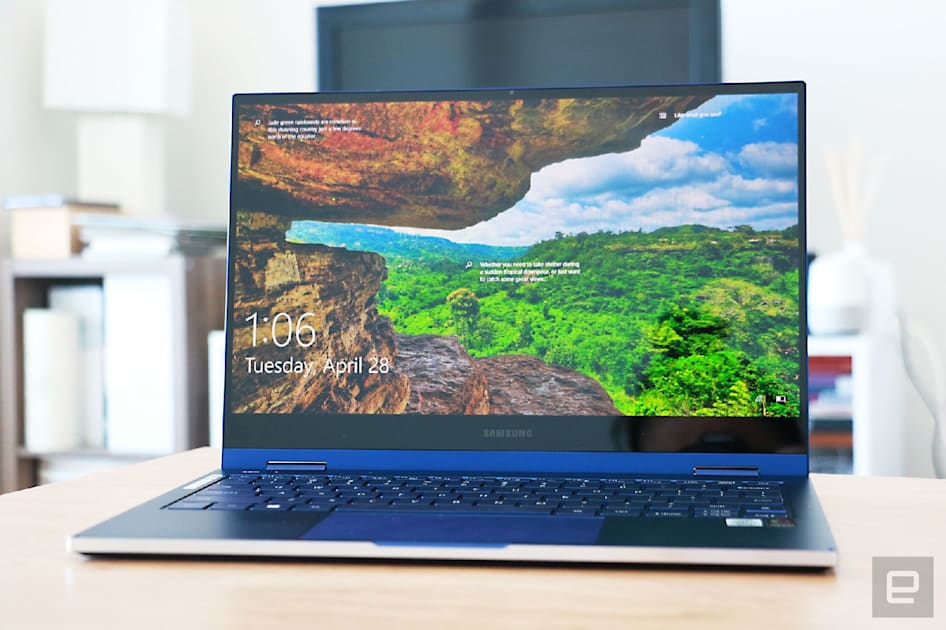 I’ll be honest: I can’t tell the difference between an OLED and QLED screen of the same size and resolution. And you might not be able to either. That is to say, you won’t have any complaints about the Flex’s full HD display in terms of color reproduction and vibrance. I watched several episodes of Amazon’s new show Upload. The rich, autumnal colors in the leafy forest settings were stunning, and it was easy to make out details in even dimly lit scenes.

My apartment gets a lot of light, so it can sometimes get hard to see any laptop’s screen. The Flex’s Outdoor Mode is supposed to combat that by bumping the brightness an extra 200 nits to 600 nits. But switching it on via the keyboard shortcut only helped a little bit. However, it was much more useful on a slightly gloomy day.

I wish Samsung hadn’t made this a mode that you switch on or off and instead offered it as a few extra levels on the built-in brightness scale. Sometimes I needed a little bit more than the built-in max, but in those situations I had to use Outdoor Mode, which scorched my retinas. Still, it probably conserves battery to only bump up brightness by that much for short periods of time rather than encourage you to use it for an extended stretch.

Outdoor Mode also added a weird yellow cast to the screen, as if it turned on a blue-light filter. This wasn’t a big deal other than when I needed to edit photos for color temperatures. In those cases, you’ll have to turn off Outdoor Mode and figure out some other way to see your display without that brightness boost.

Because it’s so slim, I was expecting the Book Flex to have shallow keys, but Samsung was able to offer a surprisingly deep amount of travel here. The keyboard is well laid out, with no undersized buttons save for the right-shift key, which is a little less wide to make room for the fingerprint sensor next to it.

My one gripe would be that the left-shift key seemed a little sticky, and too often I would try to uppercase the first letter of a word and end up getting the first two letters instead. I’d blame it on my lazy pinkie, but I haven’t encountered this on any other laptop.

A quick note on the fingerprint scanner: It was fast and accurate, usually unlocking the laptop without delay. Since it’s Windows Hello-compatible, I also used it for authentication on programs like Google Chrome. While the placement is uncommon — most laptops place their fingerprint readers on the top right of the deck or embed it into the power button — Samsung’s choice didn’t feel too odd.

Below the spacebar sits the Flex’s trackpad, which is fairly roomy given the laptop’s small footprint. Smaller notebooks often have cramped trackpads, but the surface area here is generous. It’s not as tall as the XPS 13’s or MacBook Air’s, but it offers enough vertical space. Aside from being large, the Flex’s touchpad is also responsive and smooth, and gestures like scrolling or pinch-to-zoom worked well.

One of my favorite things about Samsung laptops is the S Pen. It’s not only fun for drawing self-portraits or scribbling down notes but also helpful for signing urgent PDFs. I just had to open the document, select “Add a Note” from the toolbar and sign on the dotted line.

The Flex offers the same onboard stylus as the Note 10 — don’t expect the bigger, more pen-like version on the Galaxy Tab S series. Still, it’s comfortable enough to use for hours while drawing a self-portrait. Fans of Samsung’s Air Command menu on its Note phones will be pleased to know it pops up here too when you slide the S Pen out of its slot.

Performance and in use

The Flex may look like a dainty machine, but it actually packs a powerful 10th-generation Intel Core i7 processor. My review unit came with 16GB of RAM, which is double the 8GB configuration you can buy in the US. (The 15-inch model has the same CPU but 12GB of RAM.) Bear in mind that this means my experience, at least when it comes to performance and speed, isn’t going to be representative of what you can expect.

With these guts, the Flex deftly dealt with my daily workflow of Slack, dozens of Chrome tabs, spreadsheets and the inescapable Zoom calls that permeate our lives now. The laptop also kept up with my new at-home needs, like executing my podcast-recording setup and uploading large files for review videos. I also played several rounds of League of Legends after rediscovering it, and the Flex never let me down.

That is, until I decided to turn on Samsung’s Silent mode. This is meant to keep the laptop’s fans quiet if you’re bothered by them. It’s pretty easy to activate: Just slide a switch in the Samsung Settings app. You don’t have to go into Boot mode to access it. I never found the Flex too loud, but I guess those trying to get work done in bed next to a light sleeper or just really hate white noise might.

I did notice a significant decrease in sound when I enabled Silent Mode, though it seemed to throttle CPU performance. When I tried to continue playing League afterward, the system lag made it nearly impossible: My character could barely make it to the first turret before I gave up and restarted (with Silent Mode off). This is somewhat understandable. You can’t expect high-speed performance when the fans are turned off without the computer running too hot. Silent Mode is more useful if you’re really bothered by the noise and aren’t running anything intensive.

Thanks to the Flex’s QLED screen and 69.7Whr battery, Samsung promises up to 20 hours of runtime. In reality though, that number is a lot lower. Our video-looping battery test drained the Flex in about 13 and a half hours, which is better than the MacBook Air but falls short of the XPS 13 2-in-1’s 14-and-a-half hour mark. In real-world experience, though, I saw power levels plunge below 20 percent after five hours of heavy use.To be fair, that involved energy-sapping processes like video playback and more-frenzied League games.

One of the new features of the Flex is its trackpad’s built-in wireless charger that can deliver power to Qi-compatible devices. It’s the same Wireless PowerShare feature that debuted on the Galaxy S10. You can’t use the trackpad while you’re charging something, which makes sense, since something is literally obstructing the usable area. I’m not sure how helpful this feature is, since wireless charging is typically too slow to be meaningful. I placed the Galaxy S20 Ultra on the trackpad (after the requisite first step of turning on the feature in Settings) and watched as its battery level climbed painfully slowly from 79 percent to 85 percent in 20 minutes.

For something smaller, like the Galaxy Buds, I could see this being useful in a pinch (say, in an airplane when you’re running low on juice). Otherwise, wireless PowerShare isn’t something I’ll use a lot.

I’m enamored with the Galaxy Book Flex. It’s a pretty machine with a nice display, powerful guts and useful S Pen. But I wish there were more configurations (for each size) to make the base price lower. Sure, $1,349 for a Core i7 processor and 8GB of RAM isn’t the priciest, considering the new MacBook Air tops out at $1,199 for a Core i5 and the similarly specced XPS 13 2-in-1 costs a lot more at $1,700. But with the competition offering options starting at $999, that’s tough to swallow.

Still, if you’re looking for a gorgeous, beefy laptop with a good screen and don’t need it to last forever, the Galaxy Book Flex is worth considering. More important, it proves it’s time to take Samsung’s laptops seriously again.