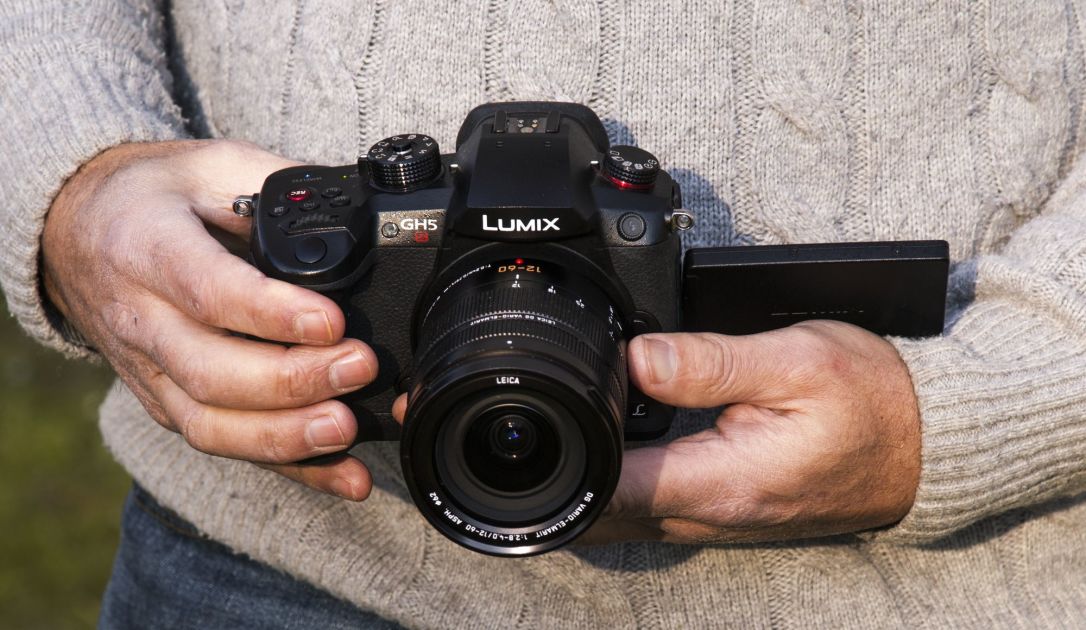 I’ve tested a lot of mirrorless cameras and I’ve never found one that handles as well as the GH5s for video. It’s loaded with manual controls that make it easy to adjust important settings like ISO, white balance, shutter speed and aperture.

The flip-around screen is indispensable as I need to be able to see myself when doing standup or using the camera. For other types of shots, the 3,680K dot OLED makes it easy to film in bright sunlight. It’s relatively lightweight and easy to lug around, battery life is good and it has two dual UHS-II card slots, making it possible to shoot all day without changing memory cards.

On the audio side, you can adjust the microphone socket to line (high) or mic (low) levels and power smallish lavalier-type mics. Using a relatively cheap wireless Rode lav mic and Rode shotgun mic, I’m able to record good-sounding audio without any assistance.

For standup, I use a smartphone and Panasonic’s camera app to remotely adjust settings, check the image and start and stop recording. The camera app takes a long time to connect to the camera, but it works well otherwise.

On a typical shoot, I’ll usually set the GH5s up on a fluid-head tripod and film the review camera, with the autofocus set and locked. Then I’ll film myself using the camera with the autofocus enabled in single point, continuous mode. For standups, I use the face-detection autofocus.

There’s no doubt that contrast-detect autofocus isn’t as good for video as the phase-detect systems in Canon or Sony cameras. There’s always a slight wobble as it overshoots focus then comes back, because that’s how contrast-detect AF works. When I first started using the camera, I (and our video production team) noticed this problem in a couple of early videos.

However, I’ve got to hand it to Panasonic for improving the autofocus system on the GH5s, via firmware updates, shortly after I acquired it. For the type of shooting I do, the autofocus now works fine and rarely misses focus. For instance, when I film myself handling a camera up fairly close to the lens, it tracks focus well when I’m moving it toward the camera or flipping it around. (It might not fare as well for less predictable run-and-gun shooting, so I’d recommend doing a thorough test before buying one.)

But what about the lack of stabilization for handheld shooting, you might ask? After all, the GH5 does have excellent in-body stabilization and the GH5s has none.

First of all, this isn’t too big an issue for me because I rarely shoot handheld. However, when I do (usually with an assistant operating the camera) I simply use one of Panasonic’s many stabilized lenses. My go-to lens is the very versatile 12-60mm f/2.8-4.0 lens which has excellent stabilization (plus great optics and very good macro capabilities, by the way). For stationary hand-held shooting, or with very smooth camera moves, that works just fine.

When it comes to photography, there’s little doubt that the GH5 and any other higher-resolution camera, particularly one with in-body stabilization, would be a better choice. Still, the GH5s is actually better for the dimly-lit trade shows or indoor hands-on sessions where I often need to film. I just have to be more careful about framing, knowing that I don’t have a lot of extra resolution to crop.

Also, I have to admit that I sometimes cheat on photos by just extracting them from the 4K video. This is only possible because the video is so outstandingly sharp and color-accurate.

Finally, once I’m ready to edit a video, the footage is easy to handle in post. If I’m planning to use Adobe Premiere Pro CC, I do have to convert the 10-bit 4K footage to a more easily editable format like Cineform or ProRes. However, with DaVinci Resolve 16 — which makes better use of my NVIDIA GTX 1070 GPU — I can edit the footage directly with no transcoding.

The 10-bit 4:2:2 video is easy to adjust, whether I use a log profile or not. I rarely see banding or other nasty artifacts in case I need to push the footage.

So in conclusion, yes, I’m definitely happy with the GH5s and don’t regret my decision to get one. It was a good camera when it entered the market and Panasonic has made it better over time.The only other camera I would think about replacing it with is Panasonic’s full-frame S1H, which is in many ways a full-frame version of the GH5s. However, that camera costs over twice as much and the lenses are also very expensive. Until something comparable comes along, the $1,800 GH5s is perfect for my needs, and that’s what counts the most.