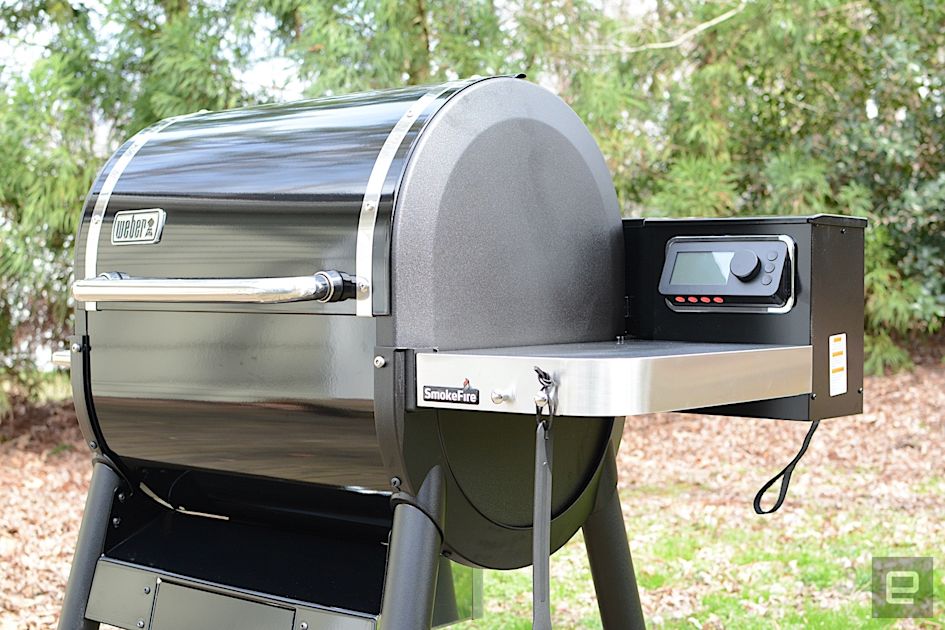 The SmokeFire grills run on Weber Connect, which is built on JuneOS — the same software that powers June’s smart ovens. It can monitor the grill and internal food temperatures to guide your cooks. Like the Smart Grilling Hub, Weber Connect will lead you through cooking a variety of meat and seafood, from prepping to final slicing, and every step in between. The app will tell you when to complete each step, estimate how long until the next one and offer video how-tos if you need a visual aid.

You can also run Weber Connect in a more manual mode, with the target-temperature option. Here, you’re overseeing the process on your own without the step-by-step instructions. As you might expect, you can control everything on the grill itself — including setting and adjusting temperature, timers and more. However, if you want to employ the estimated-doneness times, you’ll need to select a meat or seafood preset and send it to the grill.

Even though Weber Connect gives you a specific cooking temperature, picking a preset doesn’t send that info to the grill for you. You have to manually set it yourself before beginning the ignition process. This sounds like an inconvenience, but it’s not. No WiFi pellet grill will allow you to start it remotely, for safety reasons. Some grills, like Traeger’s, will send temperature info, but you still have to physically push the ignite button, so it’s not exactly a huge time saver.

When I reviewed the Smart Grilling Hub, I didn’t have any issues with the estimated cooking times. Almost always, the time frame the device provided once the grill recovered from me putting the meat on was accurate. There were fluctuations when I’d lift the lid to check, or if there was some other environmental trigger, but both short and long cooks were finished pretty close to the initial estimate.

With the SmokeFire, that wasn’t always the case. Notifications to flip and remove quickly seared steaks were fine, but the time estimates on both of the smoking sessions that lasted eight hours or more were way off. Weber Connect said a brisket I was cooking still needed another two hours, even after it hit an internal temperature of 200 degrees. I had a similar outcome with a pork shoulder. The time estimate to wrap was also slightly off on the latter, showing an hour and a half about 20 minutes before pinging my phone that it was time to complete that step (of course I had left the house to run an errand). These time estimates can be handy for longer cooks, and they were a welcome feature on the Smart Grilling Hub. However, on the SmokeFire grill, there’s room for improvement.

Weber has pledged to do just that. The company committed to adding more cook profiles to the app on a quarterly basis. Like I mentioned in the Hub review, there are some limitations and omissions right now (specific steak cuts and pork ribs, for example). Weber Connect is also missing key SmokeFire tools like the ability to adjust the grill temperature from your phone. That’s a basic feature that nearly every other WiFi-enabled pellet grill has onboard. Weber has already pushed software updates to improve how SmokeFire runs, so I hope it can move quickly to add the temperature adjustment as well.