Samsung Galaxy Chromebook review: Great, until the battery runs out 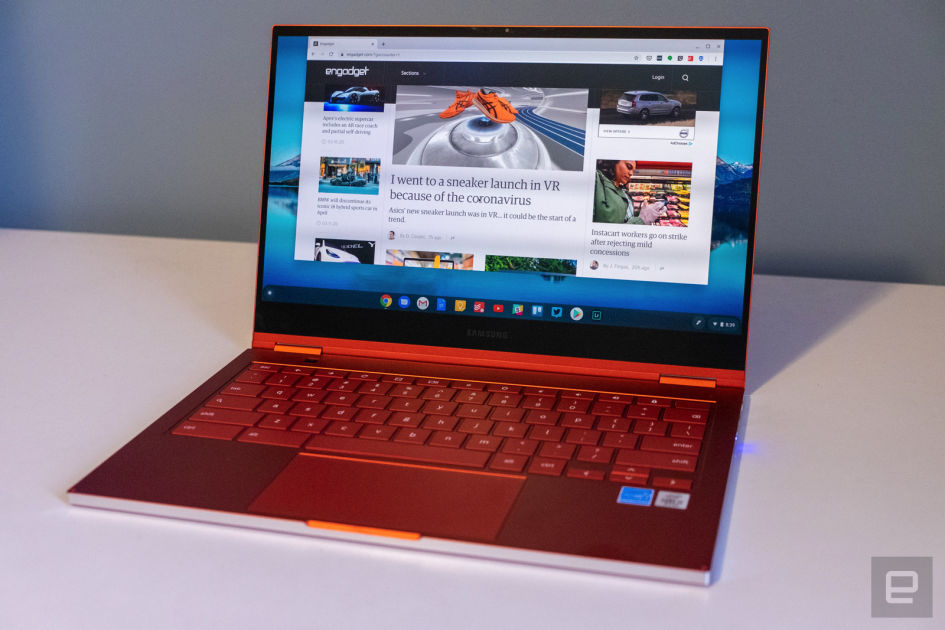 There are no two ways around it: The Galaxy Chromebook is a head-turner. The metallic red pops like few other laptop colors I’ve seen over the years. (You can also get the laptop in a more pedestrian gray, if that’s your jam.) It’s not just the color, though: The Galaxy Chromebook’s silver metal edge is squared off, not contoured like most laptops. It’s near-identical to the design of the original Pixelbook, and it helps the computer stand out when it’s closed.

The Galaxy Chromebook has an intriguing set of ports and features. For starters you’ll notice two USB-C connections, one on each side. Samsung also included a microSD card slot — I would have preferred a standard SD slot, but it’s better than nothing. Since the Galaxy Chromebook has a 360-degree hinge, there are two small speakers on the side for when you have the laptop flipped into tablet mode. The power button is also on the side along with a volume rocker. Finally, there’s a slot for the included stylus, which feels quite similar to those included with Samsung’s Chromebook Plus and Chromebook Pro from 2017.

The Galaxy Chromebook’s tiny side speakers had me a bit worried about audio quality, but I came away pleasantly surprised. There’s a third larger speaker underneath the laptop that fires into your lap or a desk, and the combination of that and the smaller speakers do a good job for music playback and YouTube videos. They’re not as good as the excellent speakers on the MacBook Pro I use every day, with a bit less overall volume and bass response. They’re also a little bit tinny, as many laptop speakers are, but they’re definitely better than I expected.

The Galaxy Chromebook’s 360-degree hinge lets you flip it around and use it as a tablet in a pinch, or prop it up for watching videos. I’ve never found 360-degree modes very useful. Even though this computer is only 9.9mm thin and weighs about 2.3 pounds, that’s still a lot bigger and heavier than my iPad. But, it makes for one very compact laptop. It’s ever-so-slightly slimmer than the original Pixelbook, and much thinner than the Pixelbook Go.

While I don’t really care about being able to flip the screen around, the Galaxy Chromebook excels as a more traditional laptop. For starters, Samsung absolutely nailed the keyboard here. It’s quiet and comfortable, possibly even more so than the Pixelbook Go. It’s quickly become one of my favorite computers to type on. It’s the same keyboard layout you’ll find on most Chromebooks, with one notable exception. There’s a fingerprint reader, right where Touch ID sits on MacBooks. Setting it up was easy and, once I figured out how it wanted me to position my finger, it was a reliable and fast way to sign in.

The trackpad isn’t quite as inspired. It’s smooth and responsive, but just a little bit too small, particularly in the vertical direction. There’s a good amount of space between the edge of the chassis and the top of the keyboard, so I wish Samsung had pushed things up a bit to make for a bigger touchpad.

But if that were the case, there might not be room for the camera embedded in the keyboard deck. Don’t worry, it’s not for video chat. Samsung says it’s primarily there for taking pictures of a whiteboard in class, for example, or for scanning documents. That requires flipping the screen around so you’re in tablet mode, which makes sense — but Chrome OS has never handled quick switching between those two modes, and the first time I tried it, all the apps I was using crashed. It’s not a feature I rely on, but it’s there if you need it.

When looking at the Galaxy Chromebook’s screen, the first thing you’ll probably think is “Wow, those bezels are thin!” It’s true — Samsung says they’re 3.9mm wide, though the top border is slightly thicker to make room for the video chat camera. The second thing you’ll probably think is “Wow, that bottom bezel is huge.” And it is — over an inch thick, in fact. Taken as a whole, the three tiny bezels and one big one doesn’t look bad, per se, but it really makes me wish the screen extended further down.

The Galaxy Chromebook may sport an impressive 4K resolution, but the 16:9 aspect ratio just feels too limiting to me these days. Even Apple’s 16:10 laptops feel significantly more comfortable, to say nothing of the taller 3:2 ratio you’ll find in a smattering of computers these days, like Microsoft’s Surface Laptop and Google’s own Pixelbook.

In happier news, this panel looks excellent. It’s the first OLED display on a Chromebook, and the high contrast, bright colors and deep blacks were all pleasing to my eyes. The 4K resolution makes everything extremely sharp, from websites to photos and movies. Going back to my MacBook Pro was a bit of a drag, although I will say that Samsung’s display almost exaggerates colors beyond their natural hues, a common complaint with the company’s smartphone displays.

The Galaxy Chromebook also has a feature called Ambient EQ, which works like True Tone on Apple displays. That is to say, it matches the color temperature of the screen to your surroundings, a first for a Chromebook. While the idea is the same as True Tone, Ambient EQ is definitely more aggressive in terms of the adjustments it makes — the  color temperature is very warm and yellow even in rooms where I thought I had pretty neutral light. Naturally, you can turn this feature off, something I’d recommend whenever working with photos or watching a video.

My main issue with the display Samsung chose is the same I’ve had with multiple recent Chromebooks: the 16:9 aspect ratio. For a while, a bunch of Chromebooks were using taller screens that displayed more vertical content (something you’ll also find on Microsoft’s Surface hardware), but it seems the tide has turned back to the default 16:9 ratio. It’s good for watching video or splitting the screen between two apps, but I pretty much always found myself wishing I could see more of a document, web page, or chat I was in.