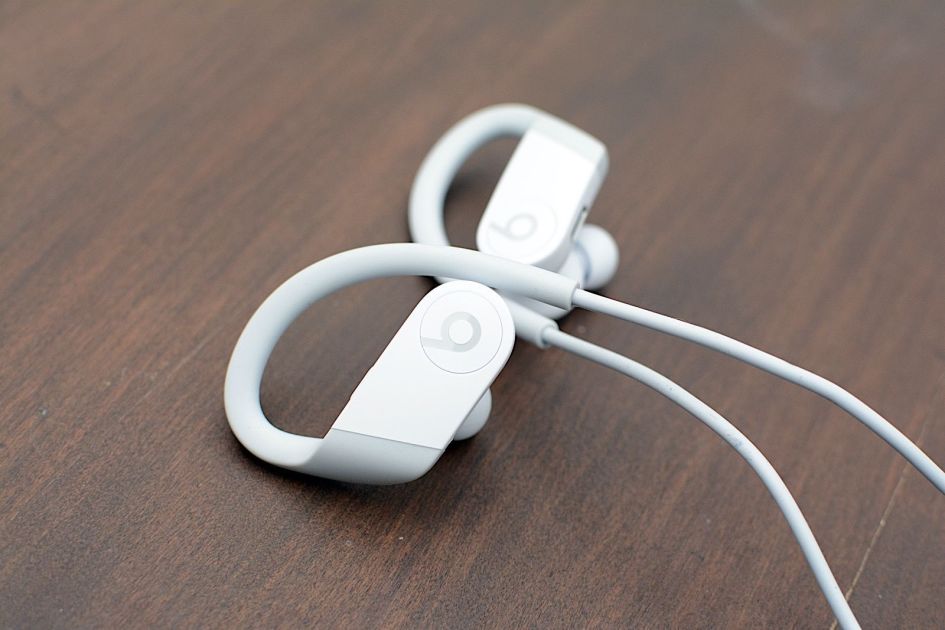 For the Powerbeats Pro, the company completely redesigned the earbud shape. Where the older Powerbeats models had rectangular horizontal enclosure, the Pro model has a diagonal shape. It’s more than just an aesthetic choice: that angle makes it much easier to access the on-board volume controls. The newer design is now on the Powerbeats, which look nearly identical to the Pro — only with the addition of a cord between the two earbuds. There’s also a Lightning jack on the bottom of the right bud, since these don’t ship with a charging case.

Another key difference between the previous model, the Powerbeats 3, and the new Powerbeats is where the cord attaches. Before it connected to the bottom of the earbuds near the front edge, so it dangled down in front of your ears before going back over your shoulder — or down in front if you wore them that way. For this updated version, the cord is routed through the back of the over-ear hook. If you wear it behind your head, this keeps the cable out of the way a bit more. You can still wear it hanging in front of your neck, but either way, it’s a cleaner look.

The over-ear hook design may not be for you, and that’s fine. I’m not a huge fan of it myself. But, I can appreciate that it helps keep the buds in place during physical activity. I tested these while working out and had no problems with them wiggling loose. (Don’t worry, I have a gym in my garage.) You’ll have issues if you wear glasses. Or if you’re like me and like to wear a hat when you lift or run, the hook will be in the way. Still, you can probably make it work. If you’d rather not bother, there are plenty of true wireless earbuds that can relieve you of the burden entirely. 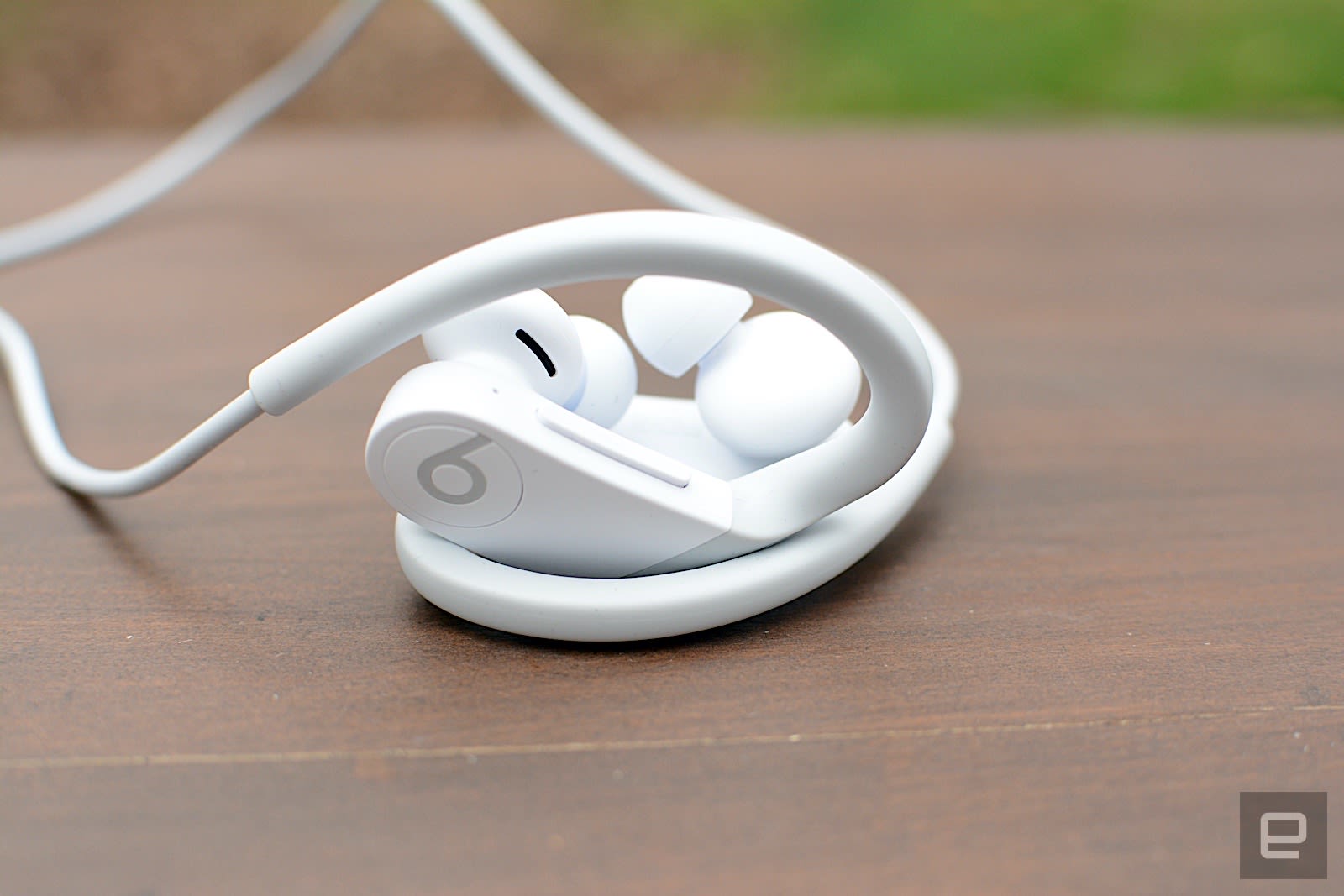 Unlike the Pro model, which has ambidextrous controls on both sides, the new Powerbeats have (almost) all the controls on the right side. It might not sound like a huge deal, but it was kinda nice to have access to everything no matter which hand is free on the Powerbeats Pro. Thankfully the controls are still easy-to-use and reliable physical buttons. There is one button on the left earbud just for power. The right houses a volume control up top and a side-mounted multi-function button on the “b” logo for track controls and taking calls.

Thanks to Apple’s H1 chip, the Powerbeats offers hands-free access to Siri just like the most recent AirPods, the Powerbeats Pro and the on-ear Solo Pro. It’s easy to overlook, but the ability to summon a voice assistant without having to push a button is very handy. That’s especially true during a workout or when you’re on a run. Of course, the H1 chip also means the Powerbeats pairs in a flash. All you have to do is turn them on near your iPhone and a pop-up will ask if you want to sync them. And once you do, they’re available on every iCloud-connected device you own, so you don’t have to futz with pairing mode to connect them with your MacBook or iPad. Yes, these also work just fine with Android devices, but iOS users get a few added benefits.

The Powerbeats has a lot of handy features, but there are a couple that it’s missing. The biggest one is active noise cancellation (ANC). Sure, you’ll get a good amount of isolation from the buds themselves, and these are loud enough to block out the rest of what’s going on around you. But it’s still worth mentioning. I can appreciate that Beats extended the battery life on these earbuds, and I realize ANC would’ve cut into that figure, so I’ll take the extra few hours. Secondly, there’s no customization. This isn’t a surprise for a set of Beats headphones. The company prides itself on knowing its customers’ sonic sensibilities. Still, the ability to change up the controls or tweak the EQ would’ve been nice. 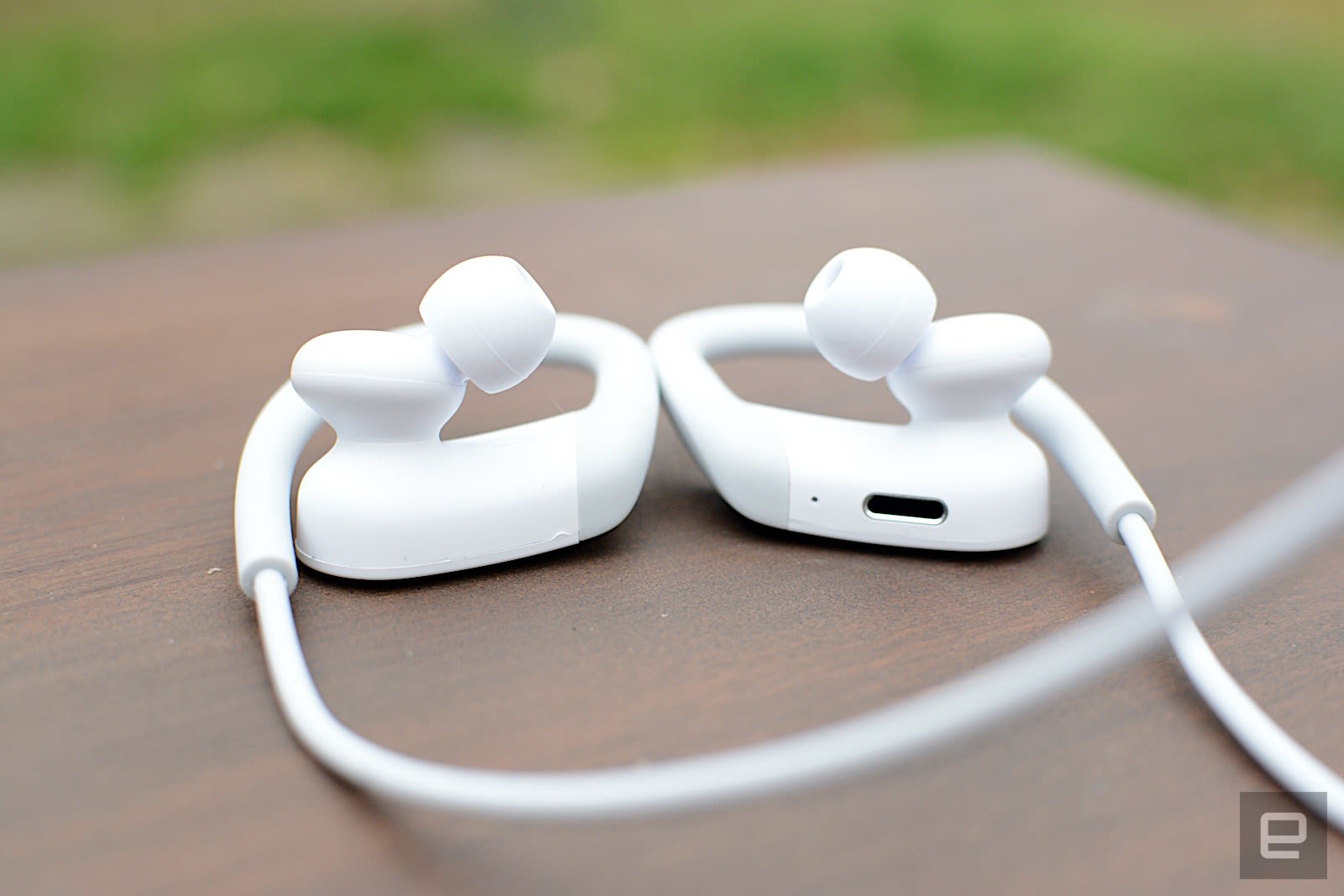 That being said, the sound quality on the Powerbeats is every bit as good as the Powerbeats Pro. There’s plenty of booming bass, which is exactly what you want to help you keep the energy up during a workout. There’s detail to that bass as well, which a lot of true wireless earbuds struggle with. More often than not, you get a ton of low-end tone, but it lacks nuance: It’s just boomy. Here you get the pulse of the kick drum in songs like Run The Jewels’ “Yankee and The Brave” and Phantogram’s “In A Spiral.”

As expected, bass-heavy genres sound the best, but the Powerbeats have good clarity and depth. Styles like bluegrass, indie rock and more ambient music sounds good, too. Like the Powerbeats Pro, the only time the Powerbeats really struggles is at higher volumes. When you get up to 90 or 100 percent volume, there’s noticeably more treble. For most things, it’s likely fine. But every once in a while I came across a song where it was unpleasant. However, if you keep things at a reasonable volume (which most people who didn’t have an awkward band phase in college will) the sound is balanced, even if there’s a slight tilt towards the low-end tone.

Beats also upgraded the battery life, promising 15 hours on a charge. That’s six hours longer than the Powerbeats Pro and more than every set of true wireless earbuds I’ve tested except the Audio-Technica ATH-CKS5TW. It’s also three hours more than the Powerbeats 3. Beats’ handy Fast Fuel feature is available here, which gives you an hour of listening time with a five-minute charge. During my tests, the longest I ran these for a combination of conference calls and music was 10.5 hours. According to my iPhone, I still had 30 percent battery left in the tank at that point which should’ve been enough to get me to the 15-hour mark. If you only use these for two to three hours a day, you can probably eek out a full five-day work week before you’ll need to reach for a Lightning cable. 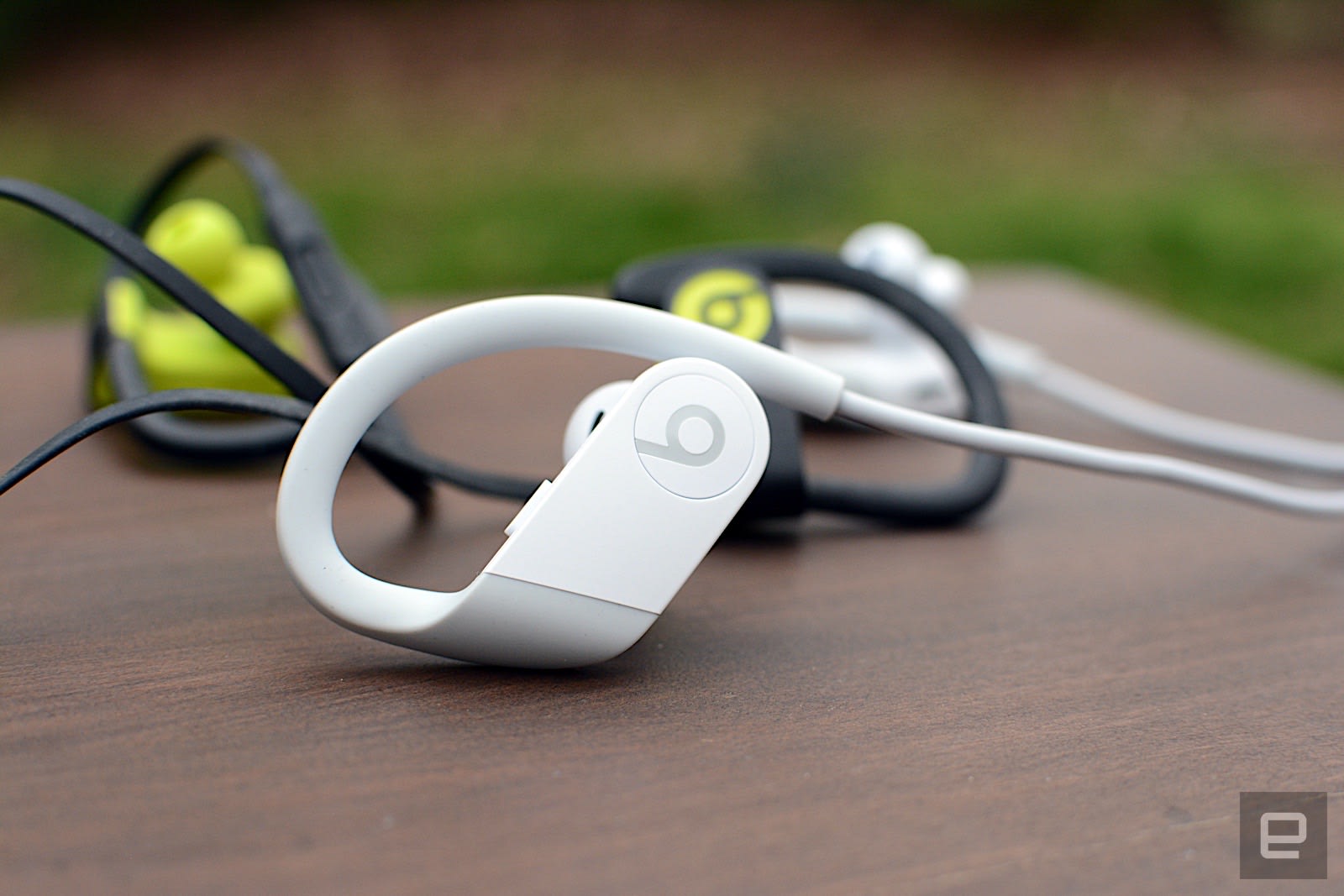 Beats badly needed to update the Powerbeats 3, and it’s done so for $50 cheaper at $149.95. The company offers a true wireless alternative in the Powerbeats Pro that retails for $249.95, but is frequently on sale for around $200. I also like the Jaybird Tarah Pro ($160), which is nice if you don’t like the hook design. Those have 14 hours of battery life and work with a companion app for tweaking the sound to your liking. They are slightly more expensive, so if you’re looking to save some coin, the regular Tarah ($100) is also worth considering. As true wireless earbuds have become the standard, tethered wireless earbuds have become a little more scarce, but there are some companies that still make them so you have a few choices.

Beats deliberately brought its Powerbeats wireless earbuds up to par with the more modern Powerbeats Pro. These new tethered earbuds have a similar design and features in a package that’s considerably cheaper than its true wireless sibling. The sound isn’t perfect, but it’s very good, and continues the company’s recent track record of more balanced tuning. There’s still plenty of bass alongside good clarity and depth, so the Powerbeats handles a range of genres well. Plus, the price is right on. For $150 you can get a decent set of true wireless earbuds, but most of them won’t sound this good, or last nearly as long.