Is the Galaxy S20 Ultra the ‘pro-level studio’ Samsung promised? 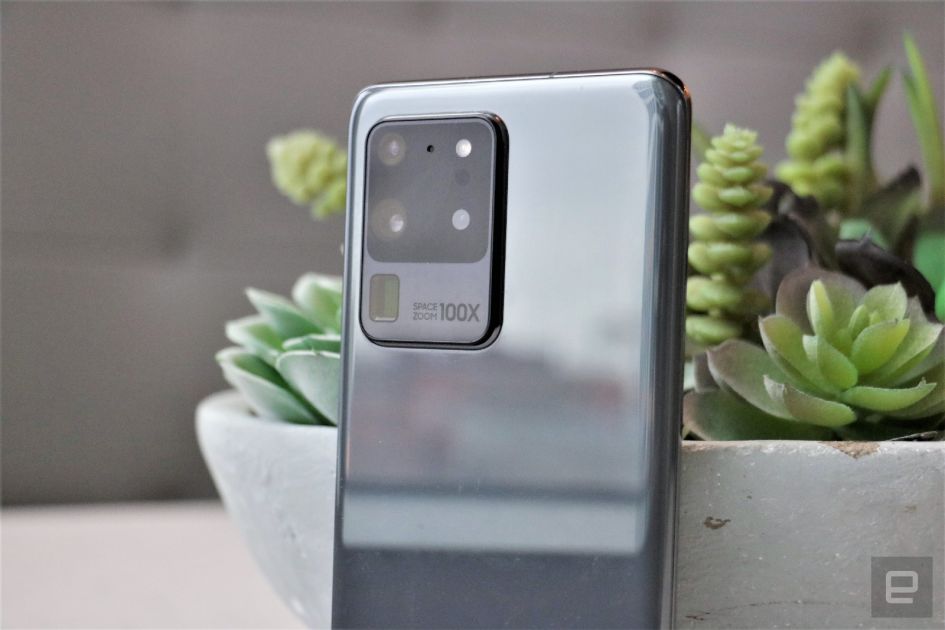 I’m not currently reviewing anything, but I want to be prepared for the future when inevitably I’ll have to become a one-woman film crew. Plus, I have long wanted to try creating makeup review videos and other vlogs for Instagram, YouTube or even Twitch. What better time to get started on my long-neglected side hustle ideas?

But first, work. I used the S20 Ultra to capture B-roll of a Galaxy S20 for an imaginary review video, getting pans and other clips of the phones, otherwise known in the biz as “beauty shots.” The footage I got was generally bright, thanks to the large windows In my well-lit apartment. I sent the files to our (talented, kind and infinitely patient) video producer Brian Oh to evaluate, asking him to ignore my lack of skills.

He said the 8K footage was acceptable, although he noted that it looked “jittery” due to a low 24 fps frame rate. Using the S20 Ultra’s manual mode, I switched over to shoot in 4K at 60 fps — the highest resolution and frame rate combination you can pick. Those results were much better, and Brian said he wouldn’t mind using the footage if he was producing for the web. Overall, though, he said that while the quality of the S20 Ultra’s clips were acceptable, he would still only use them as a last resort.

In other words, during these desperate times, the S20 Ultra’s rear camera is a decent desperate measure. A quick note on Samsung’s Pro Video mode: It only allows me to control things like shutter speed, ISO, exposure compensation, autofocus and white balance. Don’t expect the full suite of tools you’ll find on a DSLR, but the basics are there.

I also shot a makeup test to see how well the S20 Ultra could show blemish-covering foundation on my less-than-perfect skin. I’ve been dissatisfied with the quality of most makeup reviews on YouTube because it’s nearly impossible to see how well or poorly the product they’re applying adheres to their skin or settles into fine lines. I wanted to see if a high-res camera like the S20 Ultra’s could render my pores and spots clearly.

I ordered a ring light tripod kit from Amazon to try and mimic the super bright, no-shadow look that so many YouTubers adopt. But I also wanted to make sure that I had enough light on my face because I knew from experience that the S20 Ultra can sometimes produce noisy footage.

I tried using the rear cameras first, since I wanted to see how well my terrible complexion would be rendered in 8K. But since I don’t have an 8K screen, I could only play the footage back in 4K on my ThinkPad X1 Carbon. For both the beauty shots of the S20 as well as my face, I’m still not convinced that 8K video is practical, since so few people own compatible devices and the download time for such large files is excruciatingly long.

Even in the lower-res 4K playback, I could already see the scars and dark spots on my skin more clearly than in footage shot on my Pixel or older Galaxy flagships. I also wanted to get some establishing shots of the New York City skyline. Samsung’s Super Steady software did a decent job of reducing motion and shakiness as I panned outside my window. It almost felt like drone footage. Sadly, it only works for full HD capture.

If you’re trying to film yourself, though, you’ll probably be relying on the front facing cam more often than not. The S20 Ultra’s is 40-megapixels and can shoot in 4K — that’s pretty high-res for a selfie video. I used this to shoot my makeup tests, since I wanted to be able to see my face easily while filming, and I didn’t have a monitor to show what the rear sensor was capturing in real time. I’d also have to use this to shoot my standups for a review, since I’d need to make sure I remain in focus.

While the quality of the 4K videos was slightly sharper than I’m used to seeing from my Pixel 3, it was a little less crisp compared to clips from the S20 Ultra’s rear cameras. Still, I was pleased to see that the front sensor clearly captured the liquid foundation’s lack of coverage on my face. Compared to a lot of videos I’ve watched on YouTube where you can barely see a difference before and after someone’s applied powder, this was a nice change. Granted, many makeup influencers use lights that make their sets look more professional, but also subdue the appearance of imperfections.

Like any hip, trendy influencer worth their salt, I also used the S20 Ultra to stream an Instagram Live session with all five of my eager followers. The camera delivered detailed footage to my audience, and you could make out individual strands of my hair, as well as faint acne scars on my face. Instagram Live streams at full HD, though, so the S20 Ultra’s higher-res cameras don’t help very much in this scenario.