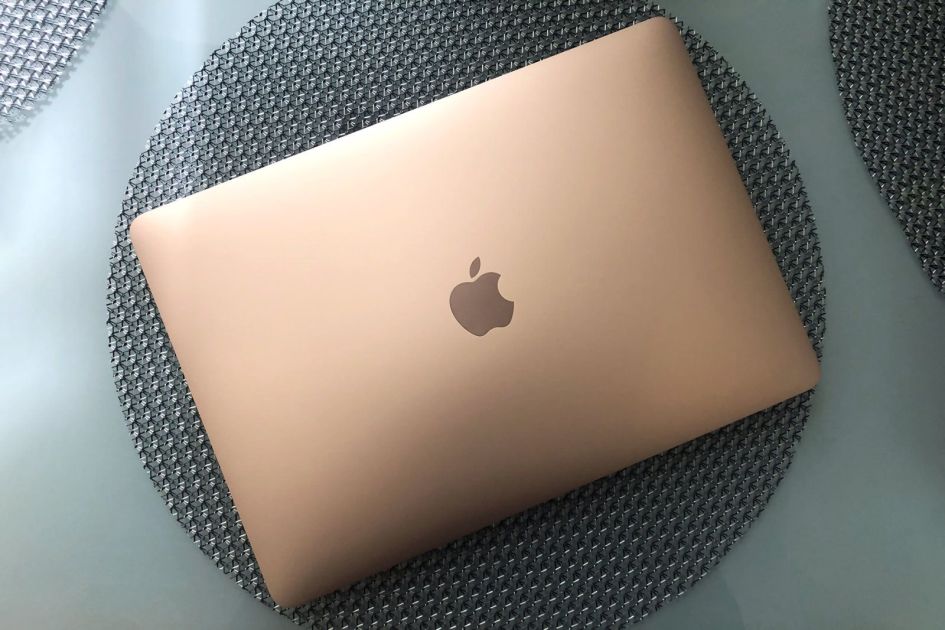 As with the 16-inch MacBook Pro, Apple also moved to a so-called inverted-T layout for the arrow keys. Now, the left and right arrows are shorter than the up-and-down arrow stack, making them easier to find by feel if you’re, say, editing text or doing work inside a spreadsheet. I dig it, but if I’m honest, I never had much trouble finding the arrow keys by feel with the old layout. Besides, the arrow keys were the least of the keyboard’s problems.

Otherwise, the design is familiar: an aluminum chassis with a slightly tapered profile, available in three colors, silver, space gray and rose gold. There’s no Touch Bar here; just an old-fashioned Function row with a Touch ID sensor all the way on the right. As ever, the fingerprint reader was easy to configure and consistent in everyday use.

The 13.3-inch display has the same resolution as the last-gen Air — 2,560 x 1,600 — with slim bezels and Apple’s True Tone technology, which automatically adjusts the color temperature depending on the ambient light. The Air has had True Tone for a little while now, but just in case you’re new to it, the difference is mainly noticeable after you’ve done a side-by-side comparison by toggling True Tone on and off in the system settings. The old color settings are fine in isolation (I’m looking at them now on my work-issued MacBook Pro), but they clearly seem colder and bluer next to a screen with True Tone enabled.

In real-world use, the display served me well during long workdays at home (check out Dark Mode apps in particular for some deep blacks). And in the evenings, I enjoyed streaming shows like The Marvelous Mrs. Maisel (yes, late to the game there), with good viewing angles whether the machine was balanced in my lap or on a coffee table in front of me. Everything else on the outside is the same too. The same 2.8-pound weight. Same dimensions. Same selection of ports — which is to say, just a headphone jack and two USB-C Thunderbolt 3 connections. If you want more than that, you’ll have to step up to the MacBook Pro, which has four of them. Either way, best to invest in a dongle or two now if you haven’t already.

I can’t speak for all of you, but I know I still use some peripherals (a Blue Yeti podcasting mic, for example) that would be easier to use if there was a full-sized USB-A port built-in. And, yes, I know every I/O standard goes obsolete eventually — I’m old enough to remember the disappearance of floppy disk drives and VGA ports — but if Microsoft can still offer a USB-A socket on the Surface Laptop 3, why have we come to accept Apple leaving it out? Even Dell at least includes an adapter with the XPS 13.

I won’t linger on sound quality, but suffice to say, it’s decent for what it is. That said, it wouldn’t be my first choice for listening to music. So many of us own smart speakers these days. Me? I have a Sonos One in both my kitchen and living room. If you have access to an AirPlay-enabled speaker, whether that’s a Sonos or Apple’s own HomePod, you’re still better off streaming through that. But, in a pinch, the Air’s built-in stereo speakers are good enough for casual listening and video calls. (If you’re like me, you’re doing a lot of those these days.)

On the performance front, Apple upgraded the CPUs on offer to Intel’s 10th-generation Core chips and fresh Intel Iris Plus graphics. The entry-level $999 model has a dual-core 1.1GHz Core i3 chip and 8GB of RAM, but the one I tested had a quad-core 1.1GHz Core i5 processor. That model will cost you $1,299. If it were me, I’d spring for the Core i5 model; laptops are meant to last for several years, after all. I imagine most of Engadget’s tech-savvy readers would make the same choice.