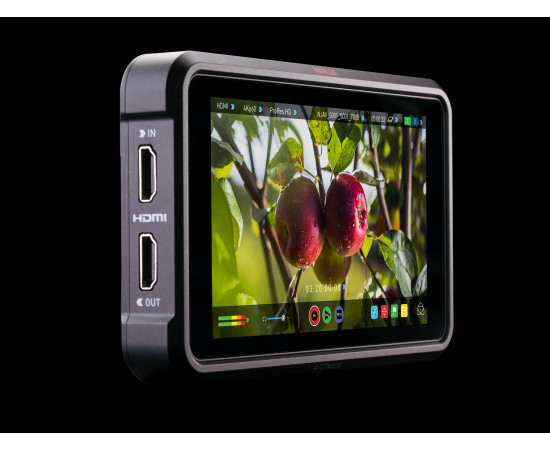 The perfect partner for your DSLR or mirrorless camera

Atomos 4k HDMI monitor/recorders like the Ninja V transform the latest photo cameras into awesome video shooting machines by recording 4k video directly from the camera in extremely high quality. Depending on the camera used, frame rates of up to 60fps can be recorded in industry standard Apple ProRes or Avid DNx codecs for easy editing. The Ninja V combines this with professional grade monitoring on a calibrated HDR 1000nit high brightness screen that allow users to perfectly compose and focus, using these amazing sensors’ full dynamic range, even outdoors. An extensive range of exposure and monitoring tools includes automated presets for popular cameras and user defined creative looks. The AtomHDR engine makes creation of HDR or standard video simple. Professional level audio connections and monitoring are also on Atomos monitors.

The launch of the Ninja V coincides with several new mirrorless cameras with 4k 10-bit HDMI output and extended Log gammas curves that are used by the Ninja V – Giving the user instant, simple HDR production. The new Canon EOS R, Nikon Z6 and Z7 and Fujifilm X-T3 now join the Panasonic GH5 and GH5S in taking full advantage of the Ninja V 4k 10-bit 422 recording to Apple ProRes or Avid DNxHR. The results from the Ninja V and these cameras are extraordinary, with billions of shades of color and wider brightness for smooth gradients. This results in better grading and finishing for both HDR and standard video.

Atomos is a company that has continually been at the forefront of the photo/video revolution – with a vision of delivering Hollywood quality video to all users at low cost.

“You can make your $100K production look like a $1m dollar movie,” enthuses cinematographer Ken Stachnik, whose low budget Denise Richards and Mischa Barton movie ‘The Toybox’ was shot almost entirely on the Sony A7S and Atomos 4k monitor recorders.

“It will allow young guys and girls to shoot almost everywhere their stories take them. It’s that freedom and creativity that this combination gives you, and that to me is going to give us a whole new set of movies.”

He acknowledges that peers and even the star of his low budget horror movie had their doubts at first. “Richards wanted to see a couple of shots early on, I think to make sure we weren’t totally crazy for using this tiny rig. Then she pulled us aside and said, ‘I think this is great.’”

And the theatrical release of ‘The Toybox’ proved that the combination could hold its own on the big screen: “It looked fantastic… I have had nothing but compliments from anyone who was there,” Stachnik says.

Atomos monitor/recorders remove the burden of processing from the camera – bypassing the usual lower bit depths, data rates or hard-to-edit internal codecs as well as avoiding overheating problems. Instead, the Ninja V and other Atomos devices connect directly via HDMI and record 4k video in high quality up to 10-bit 422 color, with easy-to-edit, Apple ProRes or Avid DNx formats which are used worldwide in professional TV and video productions. The latest cameras can also output log, recording more dynamic range from the sensor. It appears flat when viewed directly but has greater flexibility when post-processed. Atomos devices like the Ninja V can record Log video, simultaneously showing the user how the images will look – giving the best of both worlds. And the devices offer custom viewing profiles for most cameras.

Ethernet/NDI module, which allows mirrorless cameras to attach to professional NDI video networks, and the AtomX Sync module, which has wireless synchronization of multiple Ninja V equipped cameras, plus timecode and Bluetooth control. The possibilities are endless.

Atomos also offers a full line of other monitor recorders with 7 and 19 inch models. The Shogun Inferno and Sumo19 models feature the new Apple ProRes RAW codec option when used with compatible cinema cameras. Designed to be the new standard in video recording, it is a true RAW codec built from the ground up for maximum speed and image flexibility when used with Mac. Apple’s optimization makes it possible to edit ProRes RAW video with most recent professional Mac computers – in contrast to most other RAW video formats, which have much higher computing requirements. Atomos CEO Jeromy Young has publicly called for the major camera makers to give consumers the option to record better video by enabling RAW output from their mirrorless models too.